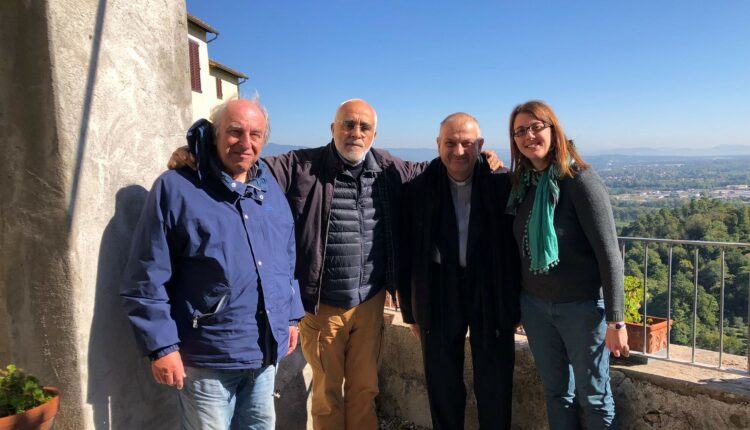 Wonderful news reaches us: Father Jacques Mourad is the new Archbishop of Homs of the Syrians

The Pope has given his assent to the election of this Syrian Catholic monk by the Synod of Bishops of the Patriarchal Church of Antioch of the Syrians.

Who is Father Mourad? What is the message that comes to us with his appointment?

Born in Aleppo on 28 June 1968, he trained in the seminary in Charfet, Lebanon.

Subsequently, his meeting with Father Paolo Dall’Oglio was decisive, together with whom he founded the monastic community al-Khalil (the friend of God, such was Abraham’s appellation) in the monastery of Mar Musa al-Habashi (Saint Moses the Abyssinian), settling where one of the oldest monastic experiences, which lasted up to two centuries ago, had originated.

The ruins in this place of the Spirit, perched on a picturesque cliff in the desert and abandoned for such a long time, were patiently restored, breathing new life into the monastery that had become the seat of the community since the 1990s.

On 28 August 1993, Father Jacques was ordained a priest and since then, together with Father Paul and the other members of the fledgling community, he has lived at Mar Musa, which immediately became a place of prayer, peace and encounter between Christians and Muslims, reaching even three hundred weekly visits by pilgrims.

A significant event for the Church in Syria, even more so when one considers that there were also people from other nations and continents.

In 2000, Father Jacques was appointed prior in the monastery of Mar Elian and parish priest of the nearby Qaryatayn, a city in the desert about sixty kilometres from Mar Musa.

In Mar Elian (St Julian of Edessa) were preserved the relics of the saint, who had always been venerated by both Christians and Muslims.

Father Jacques had developed the structures of the monastery and started the cultivation of olive trees, vines and fruit trees to give a sign of hope and also a chance of work to many families who, in fact, slowed down their emigration.

His presence was welcomed by all and he was a great spiritual reference for the entire city; for example, every Saturday, hundreds of children came to catechism, walking in procession the kilometre of road from the parish church of Qaryatayn to the monastery.

Note that all this took place in the context of a city where the overwhelming majority of the population was Muslim.

Besides Mar Musa and Mar Elian, the community also settled in Italy in Cori, in the province of Latina, and there is a stable presence of a monk in the refugee camp of Suleymanya (Iraq).

Then came the war: Father Paolo Dall’Oglio was kidnapped on 29 July 2013 and we have had no news of him to date; on 20 May 2015, Father Jacques was kidnapped together with one of his deacons and the destruction of the monastery of Mar Elian began, along with the dispersal of the relics of Saint Julian.

He was verbally abused, whipped, asked to abjure his Christianity while the blade of a knife pressed against his throat.

He was forced to wear the infamous orange jumpsuit and sentenced to death.

Father Jacques prayed the rosary every moment, he did not abjure, and on the contrary, always gazing into the eyes of his torturers, he maintained a mild and merciful gaze towards them with faith and courage (‘in the history of every man there is a before … and one must take this into account’ – he repeats even today and consequently has always forgiven everyone).

By his courageously loving behaviour, even the jiadists were touched and changed their attitude towards him.

The jailer, who at first brutally insulted him, began to show care and attention for Father Jacques until, after five months, he was released from his strict imprisonment although he remained forced to live in the Islamic state.

In his new situation, he was able to see about sixty of his parishioners who believed him to be dead by then and, on meeting him, they celebrated him, a celebration that even moved one of the jiadists (Father Mourad remembers that he had tears in his eyes). Then, they all fled the Islamic state so as not to be subjected to the remaining harassment to which, however, they continued to be subjected.

Escape by night, facilitated by the local Muslim Bedouins, who led them along paths only familiar to them. Some, for lending this help, were killed by jihadists.

A story, that of Father Jacques, marked by love for Jesus Christ and for all men without distinction of religious belief or race, as they are all children of God and our brothers.

In the present, Father Jacques and his community are rebuilding the monastery of Mar Elian, re-planting all the trees that had been uprooted by the jihadist fury, and have set themselves the beautiful as well as arduous task of bringing as many Christians as possible back to Qaryatayn, now only twenty-seven from the two thousand they were before the war.

All this, together with the rebuilding of houses and the creation of jobs.

In this work, the father is not alone. Other parties support him with passion and loyalty: among them the Spazio-Spadoni association of Lucca, which annually provides funding for part of the renovation work and the creation of job opportunities in the agricultural and artisan sectors, giving Mar Musa back its pre-war splendour and the Christian community the hope of being able to grow with the return of those who had fled because of the war.

The choice of the Synod of Bishops of the Patriarchal Church of Antioch, approved by Pope Francis, certainly has the clear significance of recognising the work carried out by Paolo Dall’Oglio and Jacques Mourad as witnesses of Christ’s love for every man regardless of religious belief, and the prophetic sense of pointing the way for the whole Church to live a relationship of dialogue and fraternal friendship with Islam.

Syria Is Not Behind Us, But It Is An Open Question

Saint Of The Day For November 18: Saint Odo Abbot Of Cluny