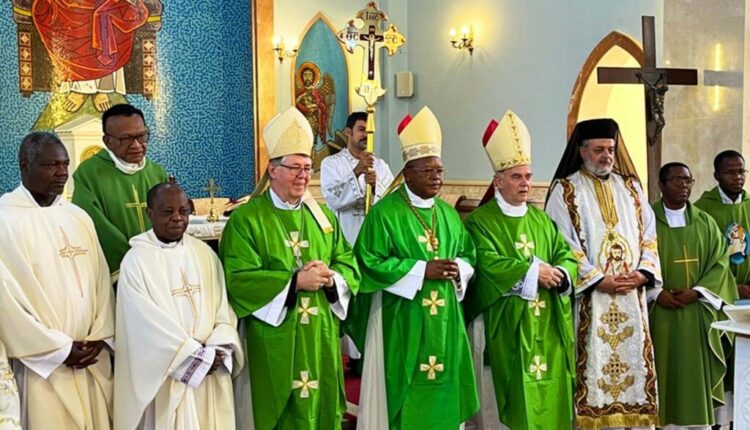 The gathering took place in the Parish of Our Lady of Peace, Sharm El Sheikh, where around 30,000 people have come to attend the climate discussions.

Cardinal Ambongo, Archbishop of Kinshasa: “A deal at COP27 must include finance for Loss & Damage”

“Climate change is a lived reality for millions of people across Africa. Communities across this continent are suffering every day from increased frequency and intensity of droughts, floods, cyclones and heatwaves.

A deal at COP27 must include finance for Loss & Damage, which is compensation for countries who are already suffering from climate impacts but are not responsible for causing it”, affirmed Cardinal Ambongo, Archbishop of Kinshasa, Vice-President of SECAM and President of the Justice, Peace and Development Commission (SECAM).

At the same time, Musamba Mubanga, Senior Advocacy Officer at Caritas Internationalis said: “Catholic institutions across the world are already on the frontlines of the climate crisis, helping people of all faiths and none to adapt to and recover from climate change. Caritas members across the world are already seeing the devastating impact that the climate crisis is having on access to food in already hungry parts of the world. COP27 must establish a democratic mechanism for the governance of agriculture, land and food systems under the UNFCCC”.

The attendees had the opportunity to discuss topics such as climate finance, food security, the Congo Basin, forced migration, and Loss and Damage, added for the first time on the agenda of negotiators.

Furthermore, they reflected on the process of the African Climate Dialogues, an initiative that brought together Church and civil society actors and allies, including communities and religious leaders from across the African continent and European organisations to share African realities of the climate crisis.

These dialogues resulted in a communiqué that includes key messages gathered throughout the five sessions that took place between July and September of this year.

“The climate crisis is fundamentally an issue of justice and peace. There can be no peace if polluters continue to profit from climate destruction whilst the people suffer, and there can be no justice without promotion of peace-led solutions to climate change.

COP27 must agree to a package of action which gets finance to people who urgently need it on the frontlines of this emergency”, commented Ben Wilson, Partner Advocacy Officer at SCIAF, CIDSE’s Scottish member organisation and member of the African Climate Dialogues Steering Committee.

Young people especially in Africa are being hit hardest by the detrimental effects of Loss and Damage, yet they are not responsible for their stolen future.

COP27 – the so-called implementation COP – must commit unanimously to avoiding further destruction and establishing an intergenerational healing and compensation mechanism of the climate-induced Loss and Damage for the vulnerable nations and youths.”

Church members and civil society organisations focused on the joint work they will develop during the second week of negotiations to ensure an agreement that responds to the cries of those who already suffer climate impacts throughout the planet.

Saint Of The Day For November 16: Saint Margaret of Scotland

A life dedicated to others: Father Ambrosoli, doctor and missionary, will be beatified on 20 November