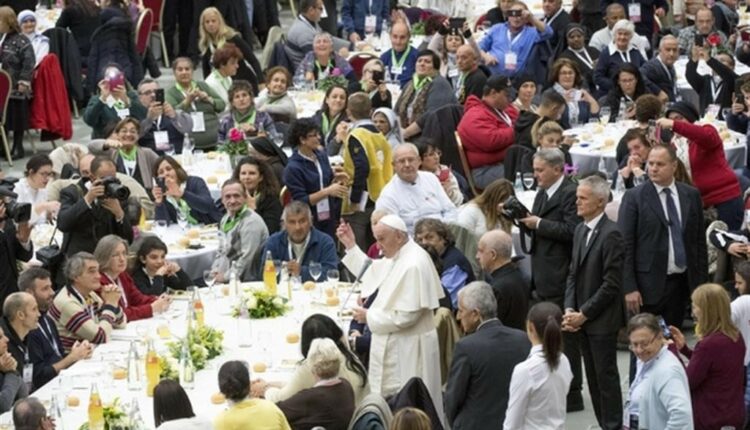 Once again this year the wonderful tradition linked to World Day of the Poor was repeated: Pope Francis had lunch with some 1,300 homeless people in Paul VI Hall

World Day of the Poor, a new economy begins with sharing food

Poverty, one of the cornerstones of the pontificate of Francis, who already in 2016 wanted to establish this Day as a moment of reflection on the inequalities that our economic system creates.

Around 1,300 homeless, migrants and people assisted by Caritas Roma, Comunità di Sant’Egidio, Acli and other associations, many of whom had attended the Mass celebrated this morning by the Pontiff in St Peter’s Basilica. Seated at a long table, the Pope shared lunch next to them.

After a two-year break due to restrictions imposed by the COVID-19 pandemic, lunch was once again offered in the Paul VI Hall to people living in poverty in Rome.

Throughout his pontificate, as mentioned, Francis has placed a strong emphasis on providing concrete help to the needy.

He has often spoken of those on the margins of society and condemned what he called a “throwaway culture” that neglects people he considers inconvenient or a burden (Angelus of 13 November).

Pope Francis also shared meals with the poor during visits to Assisi and Bologna, Italy

After the canonisation of Mother Teresa of Calcutta, on 4 September 2016, the Pope offered a pizza lunch to 1,500 poor assisted by the Missionaries of Charity, Mother Teresa’s order.

The beginning of a journey that has come to this day, and of a new and committed look at the most serious issue of all: poverty.

VI World Day Of The Poor: Initiatives Presented On 13 November

Saint Of The Day For November 14: Saint Serapion