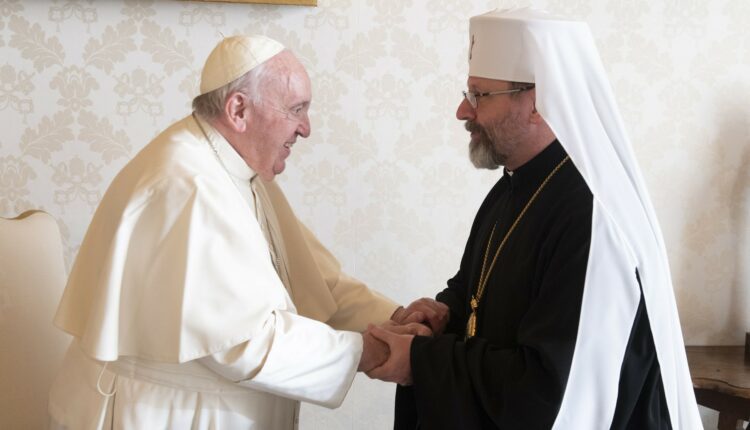 War in Ukraine, Pope Francis welcomes Archbishop Sviatoslav Shevchuk: a fragment of a Russian mine as a gift

The war between Ukraine and Russia is always at the centre of the thoughts and prayers of Pope Francis, who yesterday welcomed the head of the Ukrainian Greek Catholic Church to talk about the situation and peace

Major Archbishop Sviatoslav Shevchuk is in Rome this week to speak with Pope Francis and members of the Roman Curia about the war in Ukraine.

It is the first time he has left Ukraine since Russia launched its large-scale invasion on 24 February.

During their private meeting on 7 November, 52-year-old Schevchuk presented Pope Francis with a fragment of a mine that in March destroyed the façade of a Ukrainian Greek Catholic church in the town of Irpin, on the outskirts of Kiev.

In the embrace between the two, Pope Francis asked “how are you doing”.

‘I am alive,’ replied the Ukrainian archbishop, ‘I personally consider this a miracle’ (video at the end of the article).

In Ukraine, the UGCC is the second largest religious organisation within the Catholic Church.

Pope Francis to Archbishop Shevchuk: “I am close to the Ukrainian people”

On the morning of Monday, 7 November, Archbishop Sviatoslav met with the Holy Father Francis in the Apostolic Palace in the Vatican.

The head of the UGCC came to Rome for the first time since the start of Russia’s large-scale war against Ukraine to ‘bring the pain and suffering of the Ukrainian people to the heart of the Christian world’.

During the conversation, Pope Francis expressed his closeness to the ‘patient Ukrainian people’ and assured them that he was with them in prayer and concrete actions.

He also appealed to the head and clergy of the UGCC to ‘continue their sacrificial service in the spirit of the Gospel to the most needy and the victims of war’.

The Holy Father also spoke of the Holy See’s diplomatic efforts to stop Russian aggression and achieve a just peace for the Ukrainian people.

“Our daily concern is also to promote the solidarity of the whole world with the Ukrainians,” the Pope noted.

Major Archbishop Sviatoslav emphasised that the purpose of his visit to the Apostolic Capital “is to convey to you, Holy Father, and your collaborators the pain and suffering of my people”.

“The war in Ukraine is decidedly colonial and the people’s proposals coming to us from Russia are nothing but pacification of the colony.

Behind them is the denial of the right to the existence of the Ukrainian people, their history, culture and They carry in themselves the denial of the very right to the existence of the Ukrainian state, recognised by the international community with its sovereignty and territorial integrity, – the Head of the UGCC told Pope Francis and emphasised: – Russian peace proposals are still not having objectivity for dialogue”.

Beat Sviatoslav spoke to the Holy Father about the UGCC’s wartime service and also shared personal accounts of what he saw during pastoral visits to parishes in Central, East and South Ukraine, the territories most affected by Russian aggression.

“I told the Pope about the daily service of our bishops, priests, monks and nuns in the temporarily occupied territories.

He stressed that all our pastors remained with their people and that the premises of our churches and monasteries have become shelters and humanitarian aid centres’.

His Beat Svyatoslav also presented Pope Francis with the UGCC’s pastoral plan until 2030, whose main task is to help refugees and heal the wounds of war.

The head of the UGCC thanked the Pope for his personal efforts to end the war in Ukraine, release prisoners and organise humanitarian aid worldwide for the Ukrainian people

At the end of the audience, His Beatitudineslav presented the Holy Father with a symbolic gift: a fragment of a Russian mine that in March hit the facade of the UGCC church in Irpen. 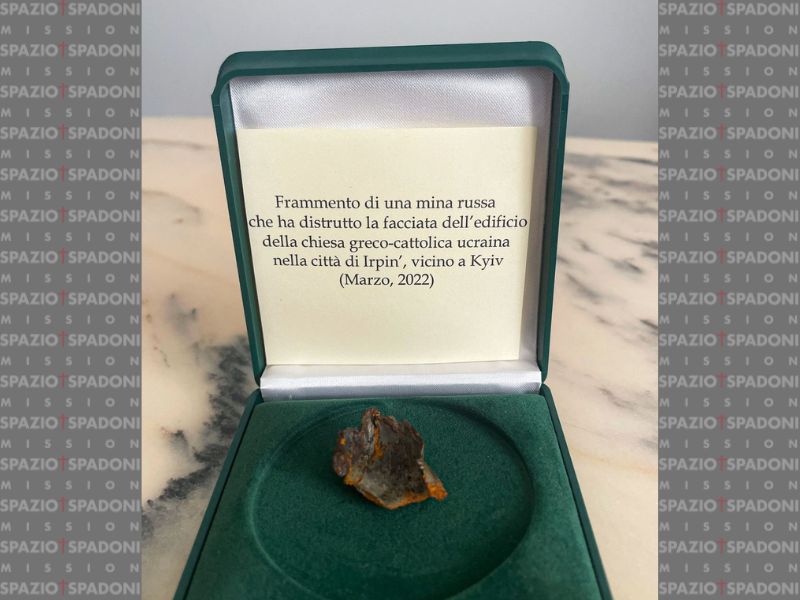 “This is because symbolic gift is not only a Russian fragment that has also symbolised our church in the city marti gift symbolise of a church in the city Irpen, but because we also daily extract similar of mines, soldiers and rockets from the bodies of, civilians and innocent children.

These are visible signs of the total destruction and death that Russia is bringing to Ukrainian soil’.