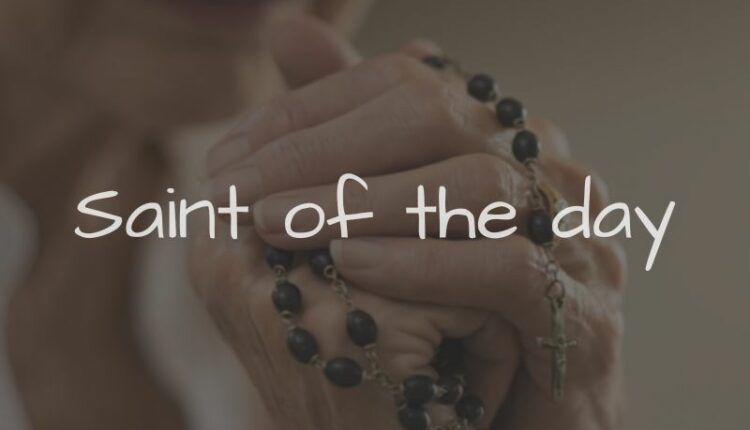 Vincenzo Grossi was an Italian presbyter, founder of the Daughters of the Oratory congregation. Beatified in 1975, he was proclaimed a saint by Pope Francis in 2015.

The Story of Saint Vincenzo Grossi

He was born in Pizzighettone, in the province of Cremona, on 9 March 1845, the penultimate of ten children of Baldassarre Grossi and Maddalena Cappellini, owners of a mill.

Cultivating the desire to resemble his brother Giuseppe, who was attending the diocesan seminary, he manifested his desire to become a priest to his parents.

After studying privately under the guidance of the parish priest, while continuing to help his father in the mill business, he was admitted to the seminary in Cremona after graduating from high school.

His first assignments were in the parishes of San Rocco in Gera di Pizzighettone, Sesto Cremonese and Cà de’ Soresini, while his first term as parish priest was in 1873 in Regona, a hamlet of Pizzighettone.

His ‘ordinary’ holiness saw him spend long hours at the confessional, while he spent just as many in front of the tabernacle.

His fame as a preacher also called him to popular missions.

In 1883 he was sent as parish priest to Vicobellignano, a difficult parish with a strong Methodist presence.

Of the “separated” brothers he said: “The Methodists must understand that I love them too”, and for this reason he tried to be for all “the stick that supports and not the rod that wounds”, with the result that Protestant families sent their children to the parish school.

Realising the need to educate the younger generations in a Christian way, especially girls, in 1885 he laid the foundations of a new congregation of women.

The Daughters of the Oratory

So called because the oratory was to be their preferred field of action and because the institute was placed under the protection of St Philip Neri- but he did not manage to obtain pontifical approval, which only came on 29 April 1926.

In fact Don Vincent died on 7 November 1917 due to peritonitis.

His last words: ‘The way is open: you must go’ became the motto of the Congregation he founded.

His remains are in a shrine in the chapel of the Mother House of the Daughters of the Oratory in Lodi.

On 23 October 1947 the Informative Process was opened in Cremona.

On 10 May 1973 the decree on the heroicity of virtues was promulgated.

Subsequently, according to the norms of the time, two healings, one that occurred on 25 December 1945, the second on 4 July 1949, were considered scientifically inexplicable and attributed to his intercession.

After the promulgation of the relevant decree on 23 May 1975, the ceremony for the beatification of Venerable Vincenzo Grossi took place in Rome on 1 November 1975.

From 2 May 2007 to 13 May 2010, a diocesan enquiry was held into the 1990 recovery of a new-born girl from Pizzighettone, suffering from ‘erythropoietic anaemia type 2’. Unable to receive a bone marrow transplant due to a lack of compatible relatives, she was kept alive through transfusions.

After a nun from the Daughters of the Oratory invited her family to pray for Blessed Grossi’s intercession, the sick woman was soon completely cured.

On 20 November 2014, the Consulta Medica deemed the healing inexplicable in the light of current scientific knowledge.

The Theological Consultors, on 14 April 2015, considered the case as a true miracle to be attributed to the Blessed’s intercession.

Pope Francis, on 5 May 2015, authorised the Congregation for the Causes of Saints to promulgate the relevant decree, followed by the canonisation ceremony on 18 October 2015.

Saint Of The Day For November 6: Saint Leonard of Noblac