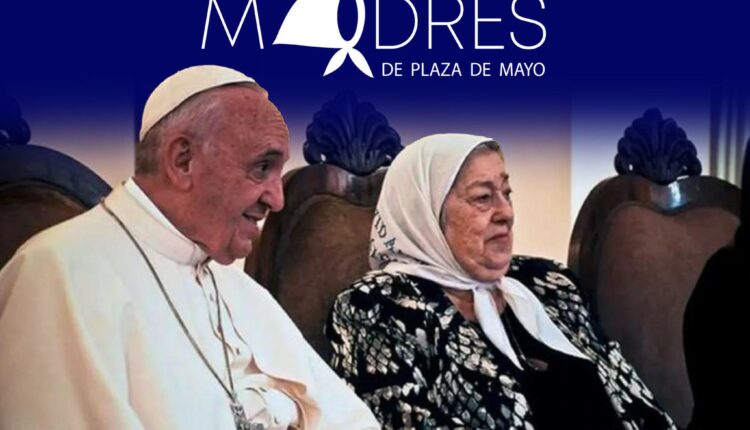 A page of history, the one that turned the lives of the Mothers of the Plaza de Mayo in Argentina, which Pope Francis saw with his own eyes

Pope Francis and those mothers of 1977 Argentina

It was 30 April 1977, sixteen women, mothers of desaparecidos girls and boys, took to the Plaza de Mayo to protest in front of the Casa Rosada.

Pope Francis, ordained a priest in 1969, was a 41-year-old priest already called to great responsibilities, at that bloody time in history, for the South American country.

They did not know it, but they all became protagonists of a cultural and social rebirth of Argentina, then crushed by a military dictatorship.

A few hours ago, news broke of the death of Hebe de Bonafini, one of the founders of the movement. An event that struck the Holy Father, who wanted to write to the organisation to express his condolences.

Pope Francis remembers de Bonafini: she transformed her grief into defence of the marginalised

In a letter to the Madres de Plaza de Mayo, who for 45 years have been demanding justice in Argentina for all those desaparecidos during the military dictatorship, Francis expresses his grief at the death of the president and founder, who died yesterday at the age of 93: ‘Her boldness and courage, in moments when silence prevailed, kept alive the search for truth and memory’.

A woman, it says (full text at the end of the article) characterised by ‘audacity and courage’ who was able to transform the pain for the disappearance of her children ‘into a tireless search for the defence of the rights of the most marginalised and invisible’.

Now her “last march”, writes the Pontiff, asking to accompany Hebe “with prayer, asking the Lord to give her eternal rest”.

Hence a final invitation to her fellow fighters: “Do not allow all the good that has been done to be lost”.

“I pray for you; please do not forget to pray for me,” was the Pope’s concluding greeting.

The condolences of the Bishops of Argentina

The general condolences of Argentina, where the government of Alberto Fernández has declared three days of national mourning, were also joined by the bishops of the Argentinean Episcopal Conference (CEA), who in a message circulated through their official social accounts expressed their condolences for the death of the Argentinean activist: “We ask the Lord for consolation for her family and friends, and we also send our condolences to the Madres de Plaza de Mayo Association”.

Argentina, Pope Francis’ letter to the Mothers of the Plaza de Mayo

To the Mothers of the Plaza de Mayo.

In this moment of sorrow for the death of Ebe de Bonafini, mother of the Plaza

Plaza, I want to be close to you and to all the people who mourn her passing.

She knew how to transform her life, like you, marked by the pain of her missing sons and daughters

into a tireless quest to defend the rights of the

most marginalised and invisible. I remember, in the meeting we had in the

Vatican, the passion she gave me for wanting to give a voice to those who did not have one.

His skill and courage, at times when silence reigned, promoted and

subsequently kept alive the search for truth, memory and justice. A

overtake the streets and history and, commitment to the other, was the best word and

antidote against the atrocities suffered.

In this her last march, we accompany her with prayer, asking the

accomplished be lost; and I comfort and accompany you to continue to be the Mothers of

I pray for you; please do not forget to pray for me. May Jesus

bless you and may the Blessed Virgin take care of you”.

Read the letter that Pope Francis sent to Argentina 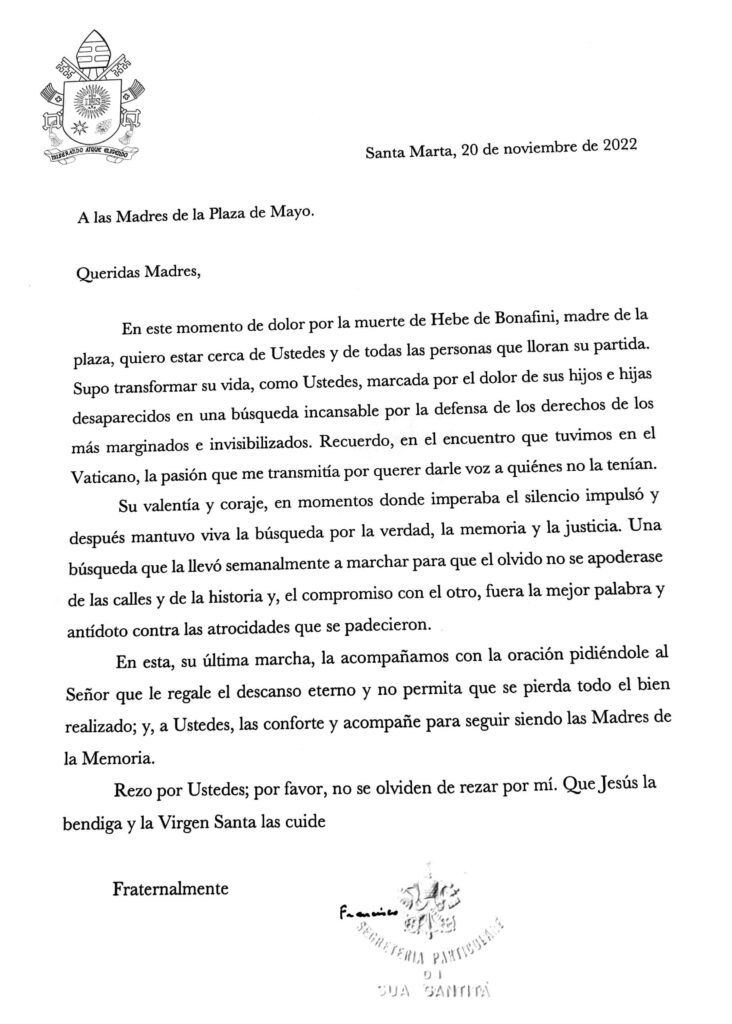 Saint Of The Day For November 16: Saint Margaret Of Scotland

Saint Of The Day For November 23: Saint Columban Abbot