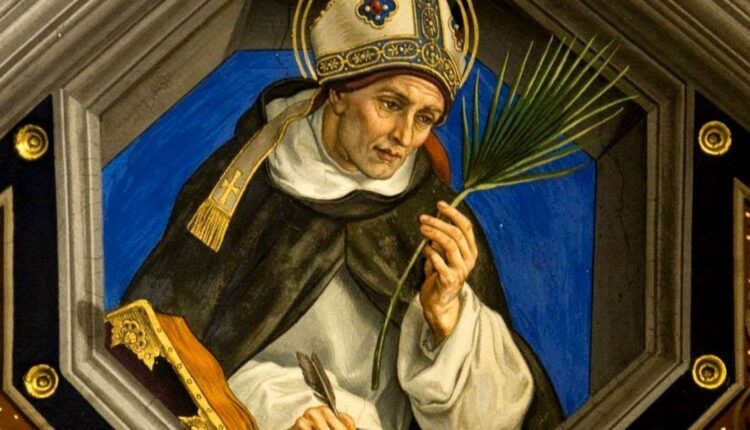 St. Albert Story:  He was born in Germany around 1200, into the family of the Counts Bollstadt, and when he grew up he was sent to study in Padua, a city of excellence for the liberal arts, and also in Bologna and Venice.

As a young student he is truly brilliant, but when he is called to study theology in Cologne, even he has difficulties, so much so that he falters in his faith.

What will save him will be his great devotion to the Virgin, who will never abandon him.

The call to the Order of Preachers

In Italy, Albert came into contact with the Dominicans, the Order of Preachers, and realised that this was his path, so he received the habit directly from Blessed Jordan of Saxony, St Dominic’s immediate successor.

From him he was sent first to Cologne and then to Paris, where he held the chair of theology for a few years and where he met his most talented pupil: Thomas Aquinas, whom he would take with him once he was called back to Cologne by the Order to found theological studies there.

Teaching was Albert’s greatest passion, after that for the Lord.

In Cologne, with Thomas, he succeeded in doing great things, so much so that during his lifetime he earned the nickname ‘Magno’, meaning great.

The two undertook the ambitious project of commenting on the works of Dionysius the Aeropagite and Aristotle’s writings on natural philosophy.

Albert succeeded in finding the meeting point between the two great scholars of antiquity in the doctrine of the soul: placed by God in the darkness of the human being, it expresses itself in knowledge and precisely in this complex and marvellous activity reveals its divine nature and origin.

With this synthesis between the wisdom of the Saints, human knowledge and the science of nature, Albert gave a profound mystical orientation to the Order to which he belonged, entrusting philosophical-theological research to the faithful Thomas.

Saint Albert: In Rome to the Pope

At the General Chapter of the Dominicans held in Valenciennes in 1250, Albert, together with Thomas, drew up rules for the direction of studies and for the determination of the system of merits within the Order.

Therefore, four years later he was removed from teaching and ‘promoted’ to Provincial in Germany.

With this post, he went to Rome in 1256 to defend the rights of the Holy See and of the mendicant religious in the Consistory of Anagni.

The Pontiff was so impressed that he kept him in the city, making him return to the teaching he loved so much, assigning him a chair at the Pontifical University.

The bishop’s chair and his last years

Surprisingly, however, in 1260 the Pope appointed Albert bishop of Regensburg.

Recalled to his homeland, the Saint worked assiduously to strengthen peace between peoples.

In 1274 he was again invited by Gregory X to take part in the Second Council of Lyons, but on his way back he was met with news he never wanted to receive: the death of Thomas.

It is a hard blow for Albert, who loves him like a son, and who only has the strength to comment thus:

‘The light of the Church is extinguished’.

He began to insistently ask Urban IV to be relieved of the pastoral office to retire to Cologne.

The Pope agreed; by writing and praying Albert came to his death on 15 November 1280.

He was canonised in 1931 by Pius XI, who also proclaimed him a Doctor of the Church, while ten years later Pius XII declared him Patron Saint of natural scientists.

Saint Of The Day For November 14: Saint Serapion

Saint Of The Day For November 13: Saint Nicholas I, Pope

SAINT OF THE DAY

Saint Of The Day For November 12: Saint Josaphat

The Future of the Missions: a Conference for the 4th Centenary of Propaganda Fide