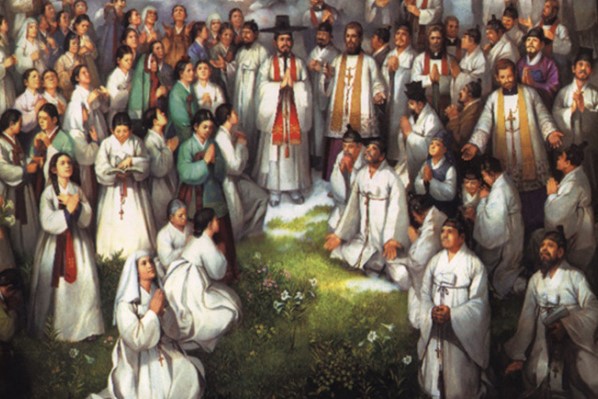 Following his baptism at the age of 15, Andrew traveled 1,300 miles to the seminary in Macao, China

After six years, he managed to return to his country through Manchuria.

That same year he crossed the Yellow Sea to Shanghai and was ordained a priest.

Back home again, he was assigned to arrange for more missionaries to enter by a water route that would elude the border patrol.

He was arrested, tortured, and finally beheaded at the Han River near Seoul, the capital.

Andrew’s father Ignatius Kim, was martyred during the persecution of 1839, and was beatified in 1925.

Among the other martyrs in 1839 was Columba Kim, an unmarried woman of 26.

She was put in prison, pierced with hot tools and seared with burning coals.

She and her sister Agnes were disrobed and kept for two days in a cell with condemned criminals, but were not molested.

After Columba complained about the indignity, no more women were subjected to it.

The two were beheaded.

Peter Ryou, a boy of 13, had his flesh so badly torn that he could pull off pieces and throw them at the judges.

He was killed by strangulation.

Protase Chong, a 41-year-old nobleman, apostatized under torture and was freed.

Later he came back, confessed his faith and was tortured to death.

Christianity came to Korea during the Japanese invasion in 1592 when some Koreans were baptized, probably by Christian Japanese soldiers.

Evangelization was difficult because Korea refused all contact with the outside world except for taking taxes to Beijing annually.

On one of these occasions, around 1777, Christian literature obtained from Jesuits in China led educated Korean Christians to study.

When a Chinese priest managed to enter secretly a dozen years later, he found 4,000 Catholics, none of whom had ever seen a priest.

Seven years later there were 10,000 Catholics.

Religious freedom came to Korea in 1883.

Besides Andrew and Paul, Pope John Paul II canonized 98 Koreans and three French missionaries who had been martyred between 1839 and 1867, when he visited Korea in 1984.

Among them were bishops and priests, but for the most part they were lay persons: 47 women and 45 men.