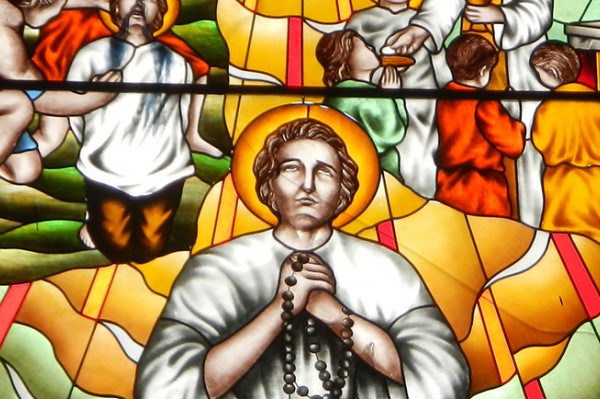 Saint of the Day, september 22: Saint Lorenzo Ruiz and Companions

Saint Lorenzo Ruiz and Companions’ Story: Lorenzo was born in Manila of a Chinese father and a Filipino mother, both Christians. Thus he learned Chinese and Tagalog from them, and Spanish from the Dominicans whom he served as altar boy and sacristan

He became a professional calligrapher, transcribing documents in beautiful penmanship. He was a full member of the Confraternity of the Holy Rosary under Dominican auspices. He married and had two sons and a daughter.

Lorenzo’s life took an abrupt turn when he was accused of murder.

Nothing further is known except the statement of two Dominicans that “he was sought by the authorities on account of a homicide to which he was present or which was attributed to him.”

At that time, three Dominican priests, Antonio Gonzalez, Guillermo Courtet, and Miguel de Aozaraza, were about to sail to Japan in spite of a violent persecution there.

With them was a Japanese priest, Vicente Shiwozuka de la Cruz, and a layman named Lazaro, a leper.

Lorenzo Ruiz, having taken asylum with them, was allowed to accompany them. But only when they were at sea did he learn that they were going to Japan

They landed at Okinawa. Lorenzo could have gone on to Formosa, but, he reported, “I decided to stay with the Fathers, because the Spaniards would hang me there.”

In Japan they were soon found out, arrested, and taken to Nagasaki.

The site of wholesale bloodshed when the atomic bomb was dropped had known tragedy before.

The 50,000 Catholics who once lived there were dispersed or killed by persecution.

They were subjected to an unspeakable kind of torture: After huge quantities of water were forced down their throats, they were made to lie down.

Long boards were placed on their stomachs and guards then stepped on the ends of the boards, forcing the water to spurt violently from mouth, nose and ears.

The superior, Fr. Gonzalez, died after some days. Both Fr. Shiwozuka and Lazaro broke under torture, which included the insertion of bamboo needles under their fingernails. But both were brought back to courage by their companions.

In Lorenzo’s moment of crisis, he asked the interpreter, “I would like to know if, by apostatizing, they will spare my life.”

The interpreter was noncommittal, but in the ensuing hours Lorenzo felt his faith grow strong. He became bold, even audacious, with his interrogators.

The five were put to death by being hanged upside down in pits.

Boards fitted with semi-circular holes were fitted around their waists and stones put on top to increase the pressure.

They were tightly bound, to slow circulation and prevent a speedy death.

They were allowed to hang for three days.

By that time Lorenzo and Lazaro were dead. Still alive, the three priests were then beheaded.

In 1987, Pope John Paul II canonized these six and 10 others: Asians and Europeans, men and women, who spread the faith in the Philippines, Formosa, and Japan.

The liturgical feast of Saint Lorenzo Ruiz and Companions is celebrated on September 28.