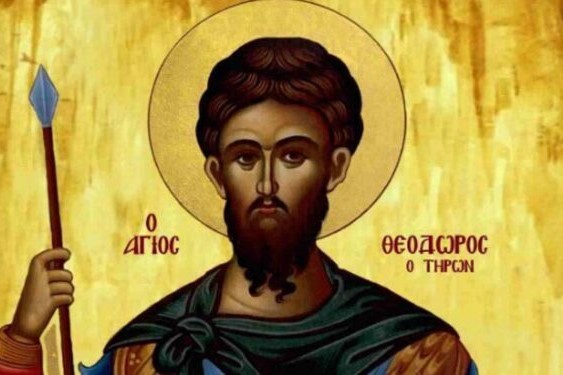 Theodore of Amasea, also known as Theodore Tyre or Tyron, was a soldier in the Roman army in Pontus, originally from the East, who suffered martyrdom for his faith in Christ.

Considered a saint by the Catholic Church and the Eastern Churches.

He had a widespread cult in the Middle Ages, linked to a well-known panegyric pronounced by Gregory of Nyssa and then to his patronage of soldiers and recruits.

The birthplace of Theodore is unknown: according to some he was born in Cilicia, according to others in Armenia.

According to tradition, he was enlisted in the Roman army and, at the time of Caesar Galerius (293-305), transferred with his legion to the winter quarters of Amasea.

The persecution against Christians already begun by Diocletian (284-305) and reiterated by Galerius, emperor from 305, with a series of edicts prescribing everyone to make sacrifices and libations to the gods, was then underway.

Sacrifice to the Gods:

Theodore refused to sacrifice to the gods, despite the urging of his companions.

He was accused of being a Christian and referred to the tribune’s judgement.

During interrogation, despite alternating threats and promises, he again refused to sacrifice to the gods.

The reluctance of governors to send the accused to death is well known, even more so in this case as he was a legionary: they preferred to resort to torture to break their resistance and save their lives.

The prefect Brinca, commander of the Marmaric legion, also considering Theodore’s young age and intelligence, merely threatened him and gave him a short reprieve to allow him time to reflect.

Theodore, however, took the opportunity to continue his proselytising work and, in order to show that he had no intention of abjuring the Christian religion, burnt the temple of the great mother of the gods Cybele that stood in the centre of Amasea, near the river Iris.

He was thus arrested again and the local judge, a certain Publius, ordered him to be scourged, locked up in prison and left to starve to death.

But this punishment seemed to have no effect on Theodore, who even refused the glass of water and ounce of bread a day that his jailers gave him.

Having miraculously escaped death by starvation, Theodore was finally released from prison and brought to trial.

The magistrates made him great promises, urged him strongly to acquiesce to the emperors’ wishes even in appearance, promising that they would let him go free.

Theodore disdainfully refused and stood up to the tribunal, not recognising their gods, mocking the overtures made to him and testifying that they would not extract a single word or gesture from him against the loyalty he owed to the Lord.

The judge, seeing Theodore’s obstinacy, then ordered him to be tortured with iron hooks, until his ribs were bare, and condemned him to be burnt alive.

The executioners led him to the appointed place and took wood from bathing merchants.

Theodore laid down his clothes and the many worshippers who had flocked to touch him, who were repelled by the executioners.

To them the martyr said: ‘Leave me so [alive], for he who endured the tortures will help me so that I may withstand the rush of the fire unharmed.

The executioners bound him, lit the stake and departed.

Legend has it that Theodore did not suffer the indignity of the flames, died without pain and rendered his soul glorifying God.

A woman named Eusebia asked for Theodore’s body, sprinkled it with wine and other ointments, wrapped it in a shroud, placed it in a chest and took it from Amasea to her estate in Euchaita, present-day Aukhat, a day’s walk away, where it was buried.

At Euchaita, on the burial site of Theodore, a basilica was built as early as the 4th century, frequented by pilgrims visiting the Saint’s tomb.

And it was in this church that St Gregory of Nyssa delivered a discourse at the end of the 4th century that recorded passages from the life and martyrdom of St Theodore.

In Amasea, a church was erected in his honour at the time of Emperor Anastasius I Dichorus (491-518).

In Constantinople in 452, by the consul Flavius Sporacius. I

n Ravenna, where there was a monastery bearing his name, by Archbishop Agnellus (557-570) the cathedral that had once belonged to the Arians was dedicated to him.

In Rome in the 8th century a church was dedicated to him under the Palatine, while his image is found in the mosaic of the Basilica of Saints Cosmas and Damian, erected by Pope Felix IV (c. 530).

St Theodore is considered the patron saint of soldiers and recruits.

Saint Of The Day For November 6: Saint Leonard Of Noblac

War in Ukraine, Pope Francis welcomes Archbishop Sviatoslav Shevchuk: a fragment of a Russian mine as a gift

Saint Of The Day For November 10: Saint Leo The Great