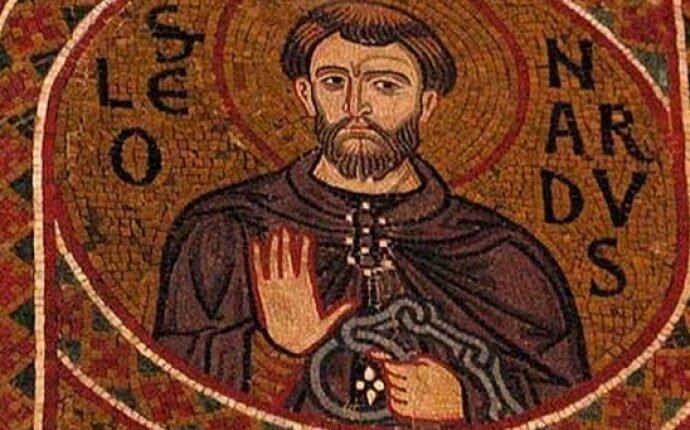 Saint Of The Day For November 6: Saint Leonard of Noblac

Leonard of Noblac, was a French abbot, who lived as a hermit most of his life; he is considered a saint by all Churches that admit the cult of saints.

In the Middle Ages he was one of the most venerated saints in Europe.

Saint Leonard of Noblac the Story

Leonard was born in Gaul into a family of Frankish nobles, in the ‘castrum vendonicense’ or castle of Vandôme, in the village of Corroi near Orléans, at the time of the Emperor Anastasius I Dicorus.

Not much is known about Leonardo’s youth.

We only know that as a young man he refused to devote himself to a career as a knight in order to follow the teachings of the then archbishop of Reims, Remigio, who had baptised him.

Having abandoned the court with his brother Lifardo, he retired for some time to the monastery of Micy; having become a deacon here he would perform his first miracle, turning water into wine.

The king of the Salian Franks, Clovis, granted him the privilege, already granted to Remigio, to free the prisoners he had met and deemed innocent.

And Leonard took advantage of this opportunity by freeing a large number of people reduced to miserable conditions and deprived of freedom.

Leonard then allegedly refused the offer of the bishop’s see to which he was entitled, preferring to retire to a monastery.

However, the growing community of hermits and former prisoners that was forming around him lacked water, and the river Vienna was far away.

Leonard, then, according to devotional legend, made a hole in the ground that miraculously filled with water, creating a well.

He then assigned a portion of the forest to the former prisoners who decided to stay with him after he was freed, so that they could clear it and draw sustenance from it.

The fledgling agricultural colony that grew up around the oratory, made up of former prisoners and simple followers, attracted here by Leonard’s reputation for holiness, is given the name NOBILIACUM

Tradition has it that the saint died on the evening of 6 November, but there is no precise date of the year, which should be around the middle of the 6th century and he was buried in the Oratory of Our Lady of Under the Trees that he had founded.

The Oratory with the remains of Leonard soon became a popular place of pilgrimage for the faithful, so much so that Pippin the Short himself probably went there on pilgrimage after his victory in the siege of Limoges.

As the number of pilgrims increased, it was decided to build a larger church and the saint’s relics were therefore transported to the erected church during the reign of Louis the Pious.

According to legend, it was the saint himself who indicated the place of his new burial.

After three days of fasting and prayer, a heavy snowfall covers the entire village, leaving a clearing free of snow.

The first certain news of the cult of this saint comes with the Historiae of Aderamo of Chabannes, written in 1028, where we read that already in 1017 “sanctus Leonardus confessor in Lemocino miraculis coruscabat et undique populi eo confluebant.”

In the same year, Ildegarius, bishop of Laron, requested a biography of the saint from Fulbert of Chartres, who, however, died shortly afterwards, leaving the work incomplete.

However, an anonymous biography of the saint entitled Vita Sancti Leonardi, with the description of nine miracles attributed to him, began to circulate in 1030, contributing to the rapid spread of his cult throughout medieval Europe.

In 1094, during an epidemic known as the ‘evil of the burning’, the saint’s relics were carried in procession and, according to legend, the epidemic ceased.

A great contribution to his cult was also made by the pilgrimage in 1106 of Bohemond I of Antioch, imprisoned by the infidels and then freed three years later, thanks, according to him, to the intervention of St Leonard whom he had invoked.

England’s King Richard the Lionheart also went to thank the saint in 1197, following his liberation from the prisons of the Holy Roman Emperor.