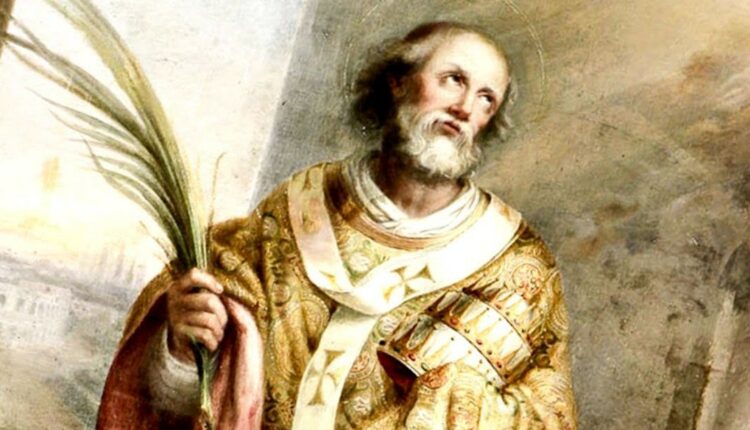 Saint Of The Day For November 10: Saint Leo The Great

Saint Leo’s Story: The pontificate of Pope Leo I spanned the middle of the fifth century (440-461).It was an era marked by great disturbances, in the world and in the Church.

One of the most famous events in his papacy occurred in the year 452, when the whole of the Italian peninsula was trembling in the face of invasion by Attila the Hun.

Already, large parts of northern Italy had fallen before the invader; the cities of Aquileia, Padua, and Milan were conquered, sacked, and razed to the ground.

Attila, threatening the interior of Italy, camped near Mantua, on the Mincio River; and it is here that he met Leo, the Bishop of Rome.

Leo had come as the head of a delegation to persuade Attila to withdraw his forces.

According to a later legend, during the negotiations, Attila had a vision of the Apostles St Peter and St Paul, carrying drawn swords, and threatening Attila if he dared to attack the city of Rome.

The story can be seen portrayed in the Apostolic Palace, in frescoes by Raphael.

Three years later, it fell again to Pope Leo to stand without human aid before a conquering army.

Genseric, a Vandal king, appeared at the gates of Rome; and although the great Pope could not persuade him to spare the city, he nonetheless convinced him to spare the Archbasilica of St John Lateran, and the Basilicas of Sts Peter and Paul.

The city was captured, but thousands of innocent people were saved when they took refuge in the Christian edifices.

Peter has spoken through Leo

The life of Leo, however, was not concerned solely with secular affairs, and the pursuit of worldly peace.

Within the Church, Pope Leo was dedicated to the preservation of the teachings handed down once for all from the Apostles.

His greatest triumph was the Ecumenical Council, promoted by him, which was held in Chalcedon (modern Kadiköy, Turkey).

There, the Council Fathers recognised and re-affirmed the truth of the union of two natures – divine and human – in the one Person of Jesus Christ.

Leo himself had proclaimed this truth in a letter, originally addressed to Flavian, the Patriarch of Constantinople.

When Leo’s “Tome” was read at Chalcedon, the Council Fathers cried out “Peter has spoken through Leo!”

Leo the Great was an ardent supporter and promoter of the Primacy of the See of Peter.

In almost 100 sermons and letters that have come down to us, the “Great Pope” shows himself as both a theologian and a pastor: attentive to the importance of communion between the churches, but never forgetting the needs of the faithful.

It was his care and concern for ordinary women and men that animated the works of charity he accomplished in an era marked by famine, poverty, injustice, and pagan superstition.

In all his actions, he strove to “uphold justice with constancy,” and to “offer clemency with love” – all in the name of Jesus, since “without Christ we can do nothing, but with Him, we can do all.”

St. Leo: A Pope of firsts

Leo’s pontificate was marked by a number of firsts.

He was the first Pope named Leo, and the first Pope to be remembered as “the Great” (later, Gregory I and Nicholas I would also be accorded the honour).

Leo is also the first Pope whose sermons have come down to us.

He is one of only two Popes (the other is Gregory) to be recognised as a Doctor of the Church.

When he died in 461, he became the first Pope buried in the St Peter’s Basilica.

His relics are preserved in the new St Peter’s, near the Altar of the Chair, in a chapel dedicated to the “Madonna of the Column.”

Saint Of The Day For November 6: Saint Leonard Of Noblac