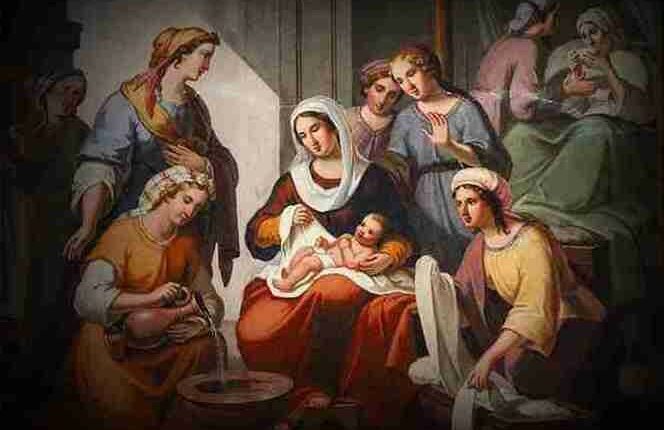 The Nativity of Blessed Virgin Mary: this is one of the most ancient Marian feasts. It is thought that this feast originated in connection with the Feast of the dedication of a church dedicated to Mary, now the Church of St Ann, in Jerusalem in the 6th century

Tradition holds that this is where the house of Mary’s parents, Joachim and Ann, stood and where she would have been born.

The Feast began to be celebrated in Rome in the 8th century with Pope Sergius I ( + 8 September 701).

It is the third such feast of a “nativity” on the Roman Calendar: the Nativity of Jesus, the Son of God (Christmas); the Nativity of Saint John the Baptist (24 June); and the Nativity of the Blessed Virgin Mary (8 September). Nothing can be found in the Gospels to confirm this feast.

They do not even give the names of her parents, which are based on a tradition that stems from the 2nd century Protoevangelium (apocryphal) Gospel of James.

The primary event in Mary’s life always remains the Annunciation.

The Church looks on her as the Mother of God, but even more so as the disciple who can best offer us an example and model of the Christian life.

In her faith, in her obedience to her Son, in the way she made herself a neighbor toward her cousin Elizabeth and to the couple in Cana on their wedding day,

Mary is the woman to imitate especially in the trust shown during the darkest moments in the life of Jesus, her Son

Here, and in many other moments, she explains why the people of God know they can find their refuge and comfort, help and protection in her.

In Milan, evidence of the celebration of this feast dates back to the 10th century.

A cathedral to the “newborn Mary” was consecrated on 20 October 1572 by Saint Charles Borromeo.

It was there, on Santa Sofia Street, that a shrine was built that housed a statue of Baby Mary, entrusted to the Sisters of Charity of Saints Bartolomea and Vincenza.

Expressing her own personal devotion, a Franciscan nun from Todi, Sister Chiara Isabella Fornari, made several wax statues of the newborn Mary wrapped in swaddling clothes from 1720 to 1730.

These sisters spread her devotion, which in the Ambrogian tradition found particularly fertile terrain.

This institute, along with many other institutions of women religious, was suppressed from 1782 to 1842 due to a decree first promulgated by Emperor Joseph II and then by Napoleon.

The statue of Mary was taken by some of the Capuchin sisters to an Augustinian convent, then to the Lateran Canonesses.

It was later entrusted to the parish priest, Father Luigi Bosisio, so he could give it to a religious institute that would keep the devotion alive. Finally, the statue ended up in the General House of the Sisters of Charity of Lovere, a religious congregation founded in 1832 by Bartolomea Capitanio.

The statue of Baby Mary become so popular there that, even till this day, the sisters of this congregation are popularly known as the Sisters of “Baby Mary”.

One story written in a chronicle in 1884 goes like this: “it was 7:00 am on 9 September 1884…. The mother went to the infirmary to visit the sick and, took the holy image from bed to bed to each of the sick sisters so they could kiss it.

She reached the postulant, Giulia Macario, who had been gravely ill for a few days.

She made an effort to draw near to the Heavenly Baby, and with tender words, asked to be healed.

She immediately felt a mysterious tremor throughout her body. ‘I am healed!’ she exclaimed.

She got up and began to walk”. Since then, every year on 9 September, the feast of “the day of the miracle” is celebrated.

This popular devotion continued to spread due to numerous graces obtained.

Saint Of The Day, 6 September: Saint Zacharius, Prophet Is Celebrated