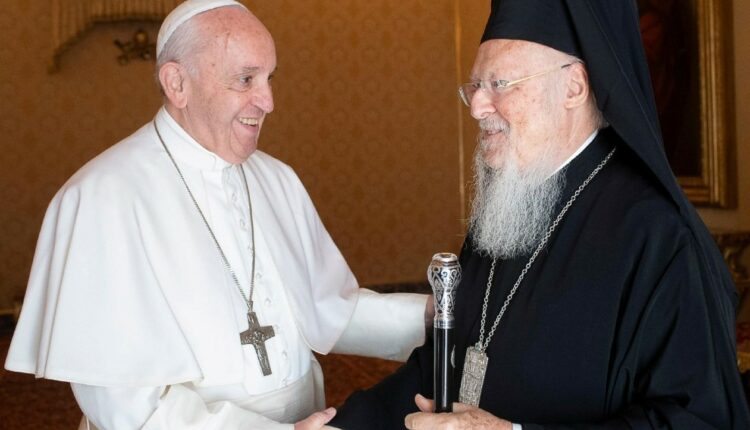 Christians today celebrate St Andrew the Apostle, brother of Peter and patron of the Church of Constantinople, an occasion that Pope Francis took to send Bartholomew I affectionate good wishes and an invitation to peace

Pope Francis greets Bartholomew I: together for peace in Ukraine

In his greetings after the catechesis, addressing the Ecumenical Patriarch he prays for the unity of the Church and a world without war.

In the message, the Holy Father calls for “the full restoration of communion”: the unity of all is not only God’s will, but also an urgent priority in today’s world

In the greetings that followed the catechesis of this morning’s General Audience, Pope Francis expressed his special affection “to his dear brother Patriarch Bartholomew I and to the entire Church of Constantinople”, where a delegation from the Holy See had gone as usual.

Message of the Holy Father Francis to His Holiness Bartholomew I, Ecumenical Patriarch, for the Feast of St Andrew

To His All Holiness Bartholomew
Archbishop of Constantinople
Ecumenical Patriarch

On the occasion of this year’s liturgical commemoration of the Apostle Andrew, the first-called brother of Peter, I am pleased once again to be represented at the Phanar by a delegation of the Church of Rome at the celebrations of the holy patron of the Church of Constantinople and of the Ecumenical Patriarchate.

I have asked the delegation to convey to Your All Holiness the assurance of my fraternal affection and my heartfelt prayer for you and for the Church entrusted to your care.

I likewise offer cordial greetings and good wishes to the members of the Holy Synod, and to the clergy and lay faithful taking part in the Divine Liturgy in the Patriarchal Church of Saint George.

The meeting of the Church of Rome with the Church of Constantinople on the occasion of their respective patronal feast days is an expression of the depth of the bonds uniting us and a visible sign of our cherished hope for ever deeper communion.

The full restoration of communion among all the believers in Jesus Christ is an irrevocable commitment for every Christian, for the “unity of all” (Liturgy of Saint John Chrysostom) is not only God’s will but an urgent priority in today’s world.

Indeed, today’s world is greatly in need of reconciliation, fraternity and unity.

The Church, then, ought to shine forth as a “sign and instrument both of a very closely knit union with God and of the unity of the whole human race” (Lumen Gentium, 1).

Much attention has rightly been placed on the historical and theological reasons at the origin of our divisions.

This shared study must continue and develop in a spirit that is neither polemical nor apologetic but marked instead by authentic dialogue and mutual openness.

We must likewise acknowledge that divisions are the result of sinful actions and attitudes which impede the work of the Holy Spirit, who guides the faithful into unity in legitimate diversity.

It follows that only growth in holiness of life can lead to genuine and lasting unity.

We are called, then, to work towards the restoration of unity between Christians not merely through signed agreements but through fidelity to the Father’s will and discernment of the promptings of the Spirit.

We can be thankful to God that our Churches are not resigned to past and current experiences of division, but, on the contrary, through prayer and fraternal charity are seeking instead to achieve full communion that will enable us one day, in God’s time, to gather together at the same Eucharistic table.

As we journey towards that goal, there are already many areas in which the Catholic Church and the Ecumenical Patriarchate are working together for the common good of the human family by safeguarding creation, defending the dignity of every person, combatting modern forms of slavery, and promoting peace.

One of the most fruitful areas of such cooperation is interreligious dialogue. Here I gratefully recall our recent meeting in the Kingdom of Bahrain on the occasion of the Forum for Dialogue: East and West for Human Coexistence.

Dialogue and encounter are the only viable path for overcoming conflicts and all forms of violence.

In this regard, I entrust to the mercy of Almighty God those who have lost their lives or have been wounded by the recent attack in your own city, and pray that he will convert the hearts of those who promote or support such evil actions.

Invoking upon you Almighty God’s gifts of serenity and joy, I renew my expression of good wishes for the feast of Saint Andrew, and exchange with Your All Holiness a fraternal embrace of peace in the Lord.

War In Ukraine, Benedict XVI: ‘I Continue To Pray For Peace’

Saint Of The Day For November 30: Saint Andrew the Apostle