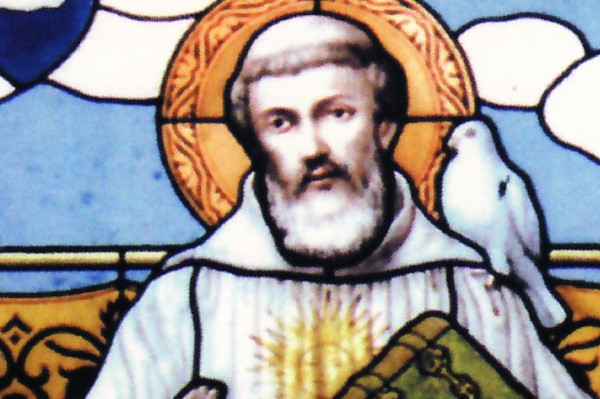 Saint Of The Day For November 23: Saint Columban Abbot

Saint Columban’s Story: he was born in Ireland between 525 and 543. From a wealthy family, educated at home thanks to private masters, he was brought up in accordance with the rules typical of the family rank.

Everything was regular, until around the age of fifteen he went to a recluse woman, with a reputation for holiness, to ask her what to do with his life.

It was she who showed him the way to the monastery, perceiving in him a solid spirituality.

Back home, he weighed up the matter and made the firm decision to leave home and his standard of living, going to the monastery of Clain-Inis, led by Abbot Sinell.

Columban: The choice of the monastery

He devoted himself to prayer and the study of Scripture and the Church Fathers, allowing himself to be fascinated by what he was discovering.

Time, however, helped him realise that he had to move away from there because family and friends were disturbing him with their frequent visits.

So he moved north to the Monastery of Bangor, guided by the austere rule of Abbot Comgallo.

Here he found his place, so much so that he was soon listed as Master of Novices, until he decided to set out as a ‘missionary’ in central Europe, where faith was again giving way to paganism.

The monastery of Luxeuil

He left with twelve monks and headed for Gaul, where he landed in 588.

Having received permission from the king of Burgundy, Gontranno, he founded a monastery near Annegray.

It was an ancient and ruined Roman fortress, inside the forest, as a guarantee of peace and tranquillity, and at the same time a good starting point to go and evangelise, as well as welcoming those who had become aware of this new presence.

The arrival of new monks led to the construction of two more monasteries: one in Luxeuil and the other in Fontaine.

Jonah of Bobbio, a monk who entered the monastery three years after the abbot’s death, and secretary to the first two successor abbots, was commissioned to write the biography of the saint.

It is he who brings us – between legend and history – some traits of the founding abbot.

One day, Jonah reports, as Columban had to write the Rule for the monks of the now three monasteries, he retired to a cave. In the evening, however, a bear returned with its prey: the two looked at each other carefully.

The bear observed him, ate his prey and left, leaving Columban alone to rest.

This shows how the holy abbot was now at one with nature.

He wrote the Rule of the Monks and the Household Rule; some details give an idea of the rigidity of monastery life.

If someone said ‘mine’ or ‘yours’ about an object, six strokes of the rod; if someone did not answer Amen in chorus, thirty strokes… Reflections of the time.

But certainly a demanding rule.

The queen, mother of King Theodoric, did not allow her son to marry because she wanted to keep power for herself.

She did, however, allow her son to have as many women as he wanted….

The people could no longer stand the queen mother, but nobody knew how to deal with her.

Even the bishop of Vienna did not know how to resolve the issue and, impatient, went to ask Columban for advice, bringing with him the king’s two illegitimate sons, asking the abbot to bless them: in this way he would legitimise in front of everyone an untenable situation.

But Columban opposed this and the queen mother, for her part, decreed that no one could enter or leave the monastery.

The king also tried to ensure that his sons could receive a blessing, bringing gifts in abundance: he even entered the refectory, thus violating the enclosure.

Thrown out by the monks, Queen Brunechilde had the king banish Columbanus and his monks from his kingdom.

The arrival of Columban at Bregenz

Given the situation, Columban left the land and undertook the journey to Rome, although, on the death of the king and the queen mother, his successor asked Columban to return: but he refused.

When they arrived in Bregenz, a priest offered the monks a church near Lake Constance: they arranged it and built the kiosk.

Columban still nurtured the desire to get to Rome.

He therefore left Gallus, one of the twelve monks who left with him for Bregenz, where he carried out an intense work of evangelisation, so much so that the area took the name of St Gallus.

In the meantime, he arrived near Bobbio, where he was welcomed and built the most impressive monastery he had ever built.

Here he found the most important library in Italy.

He died on 23 November 615. His relics rest in the crypt of the basilica dedicated to him, and he is patron of the diocese and the city of Piacenza.

Saint Of The Day For November 21: Presentation Of The Blessed Virgin Mary

Saint Of The Day For November 20: Saints Adventor, Octavius And Solutor

U.S., being missionaries while staying at home: students at a Catholic school bake biscuits for prisoners