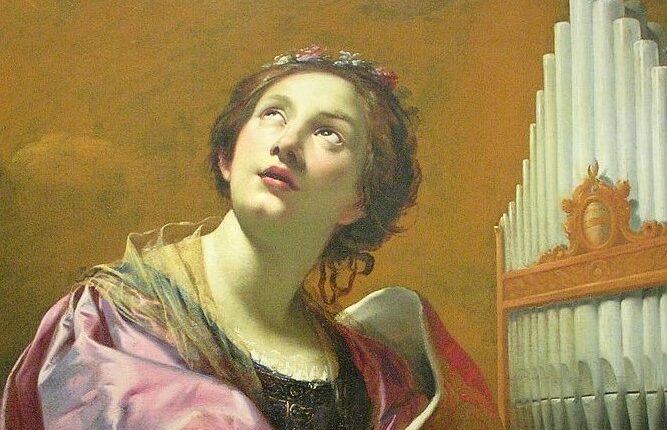 Saint Cecilia’s Story: Tradition has it that Cecilia, a noble Roman girl, was martyred around the year AD 230, during the reign of Alexander Severus and the papacy of Urban I.

Her cult is very ancient: the Basilica named after her in Rome’s Trastevere quarter, was first erected before the Edict of Constantine (AD 313) and the feast of her memory was celebrated in 545.

The Power Of Love

The tale of her martyrdom is contained in the Passio Sanctae Caeciliae, a more literary than historical text, characterized by a strong tendency toward the legendary.

According to the Passio, Cecilia was betrothed to the patrician, Valerian.

On their wedding day, she revealed that she had converted to Christianity and vowed perpetual virginity.

Valerian then agreed to be catechized and baptized secretly by Pope Urban I.

The two brothers were soon arrested by order of the Prefect, Turcius Almachius.

After being tortured, they were decapitated with Maximus, the officer who had the task of bringing them to jail, and who, along the way, had himself converted.

Almachius then decides to kill Cecilia but, fearing the repercussions of a public execution given the popularity of the young Christian, after submitting her to summary judgment, orders that she return to her home to be locked in the steam room (which was to be brought to very high temperature), thus staging a death by asphyxiation.

After one day and one night, the guards find Cecilia miraculously alive, wrapped in a celestial dew.

Almachius then ordered her decapitation, but despite the three violent blows to the neck, the executioner could not sever Cecilia’s head.

Cecilia died after three days of agony, during which she gave all her belongings to the poor, her home to the Church – and, no longer able to speak – continues to profess her faith in the Triune God, by using her fingers.

The sculptor, Stefano Maderno, has famously carved Cecilia in this posture, which he gave to the statue kept under the central altar of the Basilica that bears her name.

The Gospel on the Heart of St Cecilia

The Golden Legend, the medieval collection of hagiographic biographies composed in Latin by the Dominican Jacopo da Varagine, in which many narrative elements of the Passio are collected, tells that Pope Urban I, with the help of some deacons, interred the virgin martyr’s mortal remains in the Catacombs of Saint Callixtus, in a place of honor near the Crypt of the Popes.

In 821, Pope Paschal I, a great devotee of Saint Cecilia, invoked as “The virgin Cecilia who always carried the gospel of Christ on her breast,” translated the relics to the crypt of the Basilica of Saint Cecilia in Trastevere, which he rebuilt in her honor.

On the eve of the Jubilee of 1600, during the Basilica’s restoration by Cardinal Paolo Emilio Sfrondati, the sarcophagus containing the body of the young Saint – in a marvelously great state of preservation – was found, with the body wrapped in a silk and gold dress.

An explicit link between Saint Cecilia and music is documented from the late Middle Ages.

The reason for the association is traceable, according to some, to an incorrect interpretation of an excerpt from the  Passio.

According to others, to the entrance antiphon on the Mass of her feast day, which reads: “While the organs played, she sang in her heart only to the Lord.”

Starting in the second half of the 14th century, in different parts of Europe, Cecilian iconography began to proliferate and enrich itself with musical elements.

The Ecstasy of Saint Cecilia, Raffael’s masterpiece for the Church of San Giovanni in Monte in Bologna, depicting her with a portable organ in her hand and various musical instruments at her feet, solidified the connexion between the Roman martyr and music, for which she is  now invoked and celebrated as the protector of musicians and singers.

She was named after the Academy of Music founded in Rome in 1584.

Saint Of The Day For November 21: Presentation Of The Blessed Virgin Mary

Saint Of The Day For November 20: Saints Adventor, Octavius And Solutor

Saint Of The Day For November 21: Presentation of the Blessed Virgin Mary