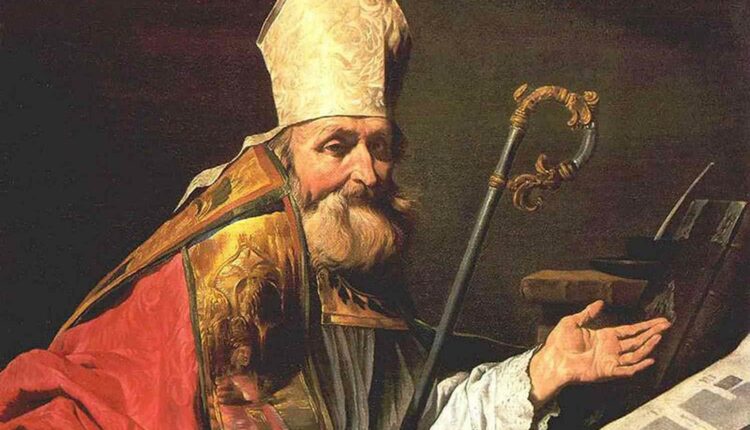 He is among the great holy doctors of the Western Church. Bishop of Milan, inventor of hymns, initiator of Mariology, Saint Ambrose embodies the ideal of the pastor.

Remembered by the Church on 7 December, he was the author of famous liturgical texts and inflexible against heresy.

Those were times of lacerating social divisions.

On 7 December 374 in a church in Milan, the discussion had become heated.

The thorny nomination of the new bishop of the city, capital of the Western Roman Empire, had exacerbated the distance between Catholics and Arians.

The denial of Christ’s divinity, supported by the latter and opposed by the former, was perceived as an insurmountable barrier in the choice of a pastor who could represent both.

Ambrose, One bishop for all

To find a mediation, the governor of Lombardy, Liguria and Emilia, known for his impartiality and fairness, was called in.

His name was Ambrose, born in 340 in Trier, Germany, to a Roman Christian family, the third-born after two siblings, Saints Marcellina and Satiro.

In Rome he had completed his legal studies in the footsteps of his father, the prefect of Gaul, learning oratory and Greco-Latin literature.

His success in his career as a magistrate and his equilibrium in handling even the thorniest controversies had made him the ideal candidate to moderate the heated Milanese debate that had begun after the death of the Arian bishop Wormwood.

Ambrose’s invitation to dialogue convinced the people and avoided the outbreak of riots.

Just when the governor thought he had successfully accomplished his mission, the unexpected happened: a child’s voice rose loudly from the crowd and was echoed by the entire assembly: “Ambrose bishop!”.

Catholics and Arians with an unexpected concord had found agreement.

The people’s invocation displaced Ambrose: he was not baptised, he felt inadequate.

He opposed this by appealing to the emperor Valentinian who, however, confirmed the people’s will.

Ambrose then fled, but Pope Damasus also deemed him suitable for episcopal dignity; he then understood God’s call and accepted, becoming bishop of Milan at only 34 years of age.

In prayer, alongside the people

He distributed all his goods to the poor and dedicated himself to the study of the Sacred Texts and the Fathers of the Church: “When I read the Scriptures,” he said, “God walks with me in Paradise”.

He learned to preach and his oratory fascinated the young Augustine of Hippo, marking his conversion.

Ambrose’s life became increasingly frugal and austere, all spent in study, prayer, assiduous listening and closeness to the poor and the people of God.

“If the Church has gold it is not to keep it, but to give it to those in need,” he said when he decided to melt down liturgical furnishings to pay the ransom of some faithful kidnapped by northern soldiers.

Ambrose, The fight against heresy

Peace and concord were his priorities, but he never tolerated error.

Artistic iconography delivers him to us with a whip while striking heretics.

Energetic was his fight against Arianism that also saw him clash with rulers and sovereigns.

From that conflict, which exploded under the pro-Arian empress Justina, Ambrose emerged victorious, affirming the independence of spiritual power from temporal power.

The episode of the massacre of Thessalonica in 390 is emblematic.

Following the massacre of seven thousand people in revolt over the death of the governor, Ambrose succeeded in arousing the repentance of Theodosius who had ordered it.

“The emperor is in the Church, not over the Church” was the conviction of the Milanese bishop who, in spite of the law, did not hand over a single church to the Arians.

The Primacy of Peter

His love for Christ, the Church, and Mary emerges from his copious literary and theological production, which gave him, together with Saints Jerome, Augustine and Gregory the Great, the title of great doctor of the Western Church.

Builder of basilicas, inventor of hymns that revolutionised prayer, tireless in prayer, Ambrose died on Holy Saturday in 397.

A huge crowd flocked to pay homage to him on Easter Sunday.

Saint Of The Day For December 4: Saint John Damascene