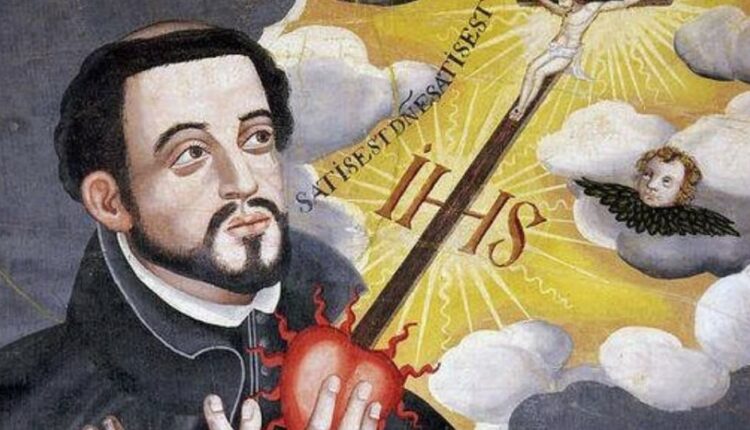 Forty-six years of life, eleven of which were spent in the missions: with good reason, Saint Francis Xavier can be considered a true “giant of evangelisation”.

In his existence, brief but admirable in missionary fruitfulness, this Spanish religious succeeded, in fact, in bringing the Gospel as far as the Far East, adapting it with wisdom to the temperament and language of very different populations.

Yet, his birthplace seems to point him towards a different life path.

Francis Xavier’s encounter with Ignatius of Loyola and Peter Favre

Born in 1506 in the Castle of Xavier, in Navarre, Northern Spain, Francis Xavier came from a noble family.

His father, Juan de Jassu, was president of the Royal Council of Navarre.

In 1525, Francis went to Paris to undertake his university studies and in 1530 became ‘Magister Artium’, ready for an academic career.

But his life took a leap of faith: at the College of St. Barbara, where he resided, the future Saint met Peter Favre and Ignatius of Loyola, with whom he trained in the study of theology.

At first, relations, especially with Ignatius, were not easy, so much so that Loyola himself would describe Francis as ‘the hardest piece of dough he has ever had to knead’.

But the missionary vocation was now instilled in Xavier’s heart and in the spring of 1539 he took part in the foundation of a new religious Order, called the ‘Society of Jesus’.

The ‘sung’ catechism for children by Francis Xavier

Consecrated to God and to the apostolate, Francis left for the Indies on 7 April 1541, at the request of Pope Paul III, who wished to evangelise those lands, at the time a Portuguese conquest.

The journey from Lisbon to Goa, made by sailboat, lasted thirteen months, made tiring by the scarcity of food, the ferocious heat and the storms.

Arriving in Goa in May 1542, Xavier chose the city hospital as his home and the bed next to the most seriously ill as his bed.

From then on, his ministry would be dedicated to assisting the last, those excluded from society: the sick, prisoners, slaves, abandoned children.

He called them together in the streets by ringing a bell and then, once gathered in church, he put the principles of Catholic doctrine into verse and sang them with the children, thus facilitating their learning.

For two years, he also dedicated himself to the evangelisation of the ‘paravi’, the pearl fishermen living in the south of the Indies.

They only speak Tamil, but Francis succeeded in transmitting the fundamental principles of the Catholic faith to them, managing to baptise 10,000 of them in just one month.

“So great is the multitude of converts,” he wrote, “that often my arms ache so much that they have baptised and I no longer have the voice and strength to repeat the Creed and the Commandments in their language.

But his evangelising work did not stop.

Between 1545 and 1547, Francis Xavier reached Malacca, the Moluccas archipelago and the Moro Islands, heedless of the dangers because he was totally trusting in God.

The arrival in Japan of Francis Xavier

In 1547, the future saint’s life took another turn.

He met a Japanese fugitive, named Hanjiro, who wanted to convert to Christianity.

This encounter aroused in Xavier the desire to go to Japan, to bring the Gospel also to the land of the “Rising Sun”.

He arrived there in 1549 and, despite the fact that the death penalty was in force for those administering the sacrament of Baptism, the Spanish religious managed to create a community of hundreds of faithful.

The “dream” of China

From Japan to China, the passage comes almost naturally.

Xavier looked to the “Land of the Dragon” as a new land of evangelisation and in 1552 he managed to reach the island of Shangchuan from where he tried to embark for Canton.

But a sudden fever seized him.

Exhausted by cold and fatigue, Francis Xavier died at dawn on 3 December.

His remains are buried in a box full of lime, without even a cross to remember him by.

However, two years later, his body was transferred, whole and intact, to Goa, to the Church of the Good Jesus, where it is currently venerated.

One of his relics – his right forearm – has instead been kept in Rome since 1614, in the Church of the Gesù.

Beatified by Paul V in 1619 and canonised by Gregory XV in 1622, Francis Xavier was proclaimed patron saint of the East in 1748, of the Work of the Propagation of the Faith in 1904 and of all the Missions (together with St Thérèse of Lisieux) in 1927.

His thoughts can be encapsulated in a prayer he often repeated:

Saint of the Day for December 4: Saint John Damascene