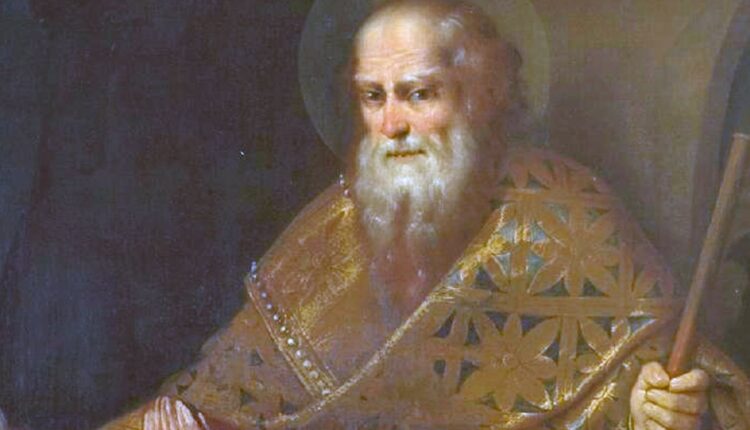 Saint of the Day for December 4: Saint John Damascene

John’s Story: was born in Syria, in Damascus, into an influential family of Christian Arabs and, while still young, inherited from his father the position of economic head of the caliphate.

Having studied, however, philosophy and theology in Constantinople alongside the monk Cosmas, brought to Syria as a slave, will be decisive for him: in fact, after a few years he leaves court life for the monastic life.

John and The choice of an ascetic life

We are around the year 700 when John chooses the ascetic life.

Before entering the monastery of St. Sheba, halfway between Jerusalem and Bethlehem, however, he strips himself of everything, distributes his wealth to the poor, gives freedom to his servants and makes a pilgrimage on foot throughout Palestine.

In St. Saba he became a monk together with his brother – the future bishop of Maiouna – then was appointed priest and took up the post of titular preacher in the Basilica of the Holy Sepulchre in Jerusalem.

He would spend more or less his entire life there, drawing from prayer and meditation the sap that makes faith grow, both his own and that of the Church to which he would make a great contribution with his writings, works and hymns.

John: The theologian of the image

At the time when John Damascene lived, sacred images were not widespread among Christians, due to a legacy borrowed from the Old Testament tradition that forbade any representation of God.

In particular, the Byzantine emperor Leo Isauricus had waged ruthless war on the cult of sacred images.

So John, at the behest of Pope Gregory III, took on the role of a strenuous defender of the images themselves, waging a fight that he would fight throughout his life: that against iconoclasm.

His main weapon was theology.

His main argument, one of the foundations of the Christian faith: the Incarnation, that is, God himself becoming man from invisible to visible, flesh and blood.

As Benedict XVI recalls in his catechesis at the general audience on 6 May 2009, John Damascene is ‘the first to distinguish, in the public and private worship of Christians, between adoration and veneration.

The former can be addressed only to God, for the latter an image can be used to address the one who is represented in the image itself’.

The St Thomas of the East

For his profound theological culture and beyond, John was nicknamed ‘the St. Thomas of the East’, so much so that for his contribution to the Eastern Church Leo XIII proclaimed him a Doctor of the Church in 1890.

The main work he left behind is De Fide orthodoxa, which synthesises both Greek patristic thought and the doctrinal decisions of the Councils of the time in an original way, and is still a fundamental reference point for both Catholic and Orthodox theology.

He also wrote De haeresibus on the most widespread Christian heresies of his time.

His theses, together with those of St. German of Constantinople, would prevail, even after his death, at the Second Council of Nicaea in 787.

John, The miracle of the hand

According to a rather widespread belief, St John was the protagonist of a miracle he received from the Virgin Mary.

While still residing at court, he was at one point accused of treason and as a sentence his right hand was cut off.

John then prayed intensely to an icon of the Virgin Mary, who heard his prayers and miraculously reattached his hand.

As thanks to Mary, Damascene has a hand made of silver made and added to the icon, giving rise to the Oriental cult of the Virgin Tricherusa, i.e. with three hands.