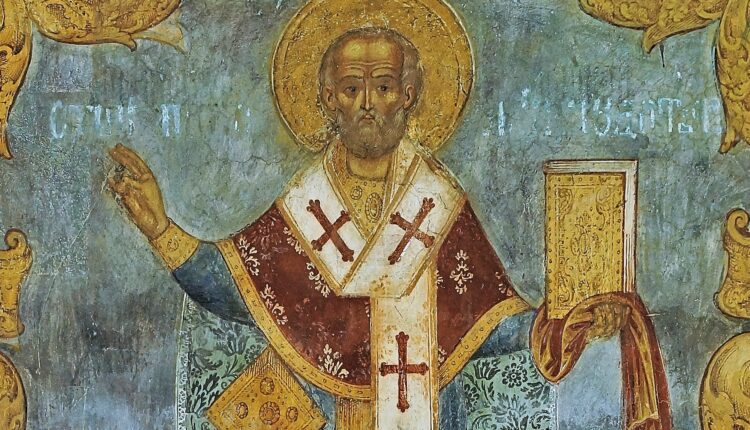 St Nicholas is one of the most popular and beloved saints, due to the tradition of him being the patron saint of children and young people.

The Life of St Nicholas

Nicholas was born in Patara, a seaside town in Lycia, southern Turkey, in the 3rd century AD into a wealthy family that educated him in Christianity.

His life, from his early youth, was marked by obedience.

Orphaned of both parents at a very young age, Nicholas, mindful of the Gospel page of the Rich Young Man, used his father’s entire inheritance to assist the needy, the sick and the poor.

He was elected bishop of Myra and under the Emperor Diocletian he was exiled and imprisoned.

After being released, he attended the Council of Nicaea in 325 and died in Myra on 6 December 343.

Many episodes have been handed down about Nicholas, and they all testify to a life in the service of the weakest, the smallest and the defenceless.

Defender of the weak

One of the oldest stories handed down about St Nicholas concerns a neighbour of his who had three daughters of marriageable age, but not enough money to secure a dowry for them.

In order to save them from a fate of prostitution, one night Nicholas collected some money in a cloth, threw it through the window of his neighbour’s house and immediately fled so as not to be recognised.

Thanks to that gift, the neighbour managed to get the eldest daughter married.

Another story tells of three young theology students on their way to Athens.

The master of the inn where they had stopped for the night robbed and killed them, hiding their bodies in a barrel.

Bishop Nicholas, also on his way to Athens, stopped at the same inn and had a vision of the innkeeper’s crime in a dream.

Gathered in prayer, St Nicholas obtained the miracle of the return to life of the three boys and the conversion of the wicked innkeeper.

This episode, as well as that of the miraculous liberation of Basil, a boy kidnapped by pirates and sold as a cupbearer to an emir (legend has it that he mysteriously reappeared at his parents’ home still holding the foreign ruler’s golden cup in his hands), helped to spread the patronage of St Nicholas over young men and boys.

During the years of his youth, Nicholas embarked on a pilgrimage to the Holy Land.

Walking the same paths trodden by Jesus, Nicholas prayed for an even deeper experience of being close to the life and suffering of Jesus.

On the way back, a terrible storm broke out and the ship was in danger of sinking.

Nicholas quietly gathered himself in prayer, and the wind and waves suddenly calmed, to the amazement of the sailors who feared shipwreck.

After St Nicholas’ death, his tomb in Myra soon became a place of pilgrimage and his relics were immediately considered miraculous because of a mysterious liquid, called St Nicholas’ manna, that leaked from it.

When Lycia was occupied by the Turks in the 11th century, the Venetians tried to seize it, but were preceded by the people of Bari who brought the relics to Apulia in 1087.

Two years later, the crypt of the new church, desired by the people of Bari on the site of the Byzantine catapano’s palace, was completed, and Pope Urban II, escorted by the Norman knights lords of Apulia, placed the saint’s relics under the altar where they still stand today.

The translation of St Nicholas’ relics had an extraordinary echo throughout Europe and in the Middle Ages the Apulian shrine became an important pilgrimage destination, resulting in the spread of the cult of St Nicholas of Bari (and not of Myra).

In the Netherlands and in the Germanic territories in general, the winter feast of St Nicholas (in Dutch ‘Sint Nikolaas’ and later ‘Sinteklaas’), and in particular his protection of children, gave rise to the children’s tradition of waiting for gifts.

On the eve of the saint’s feast day, children leave shoes or socks on a chair, or by the fireplace, and go to sleep trusting that they will find them again in the morning full of sweets and presents.

Saint Of The Day For December 4: Saint John Damascene