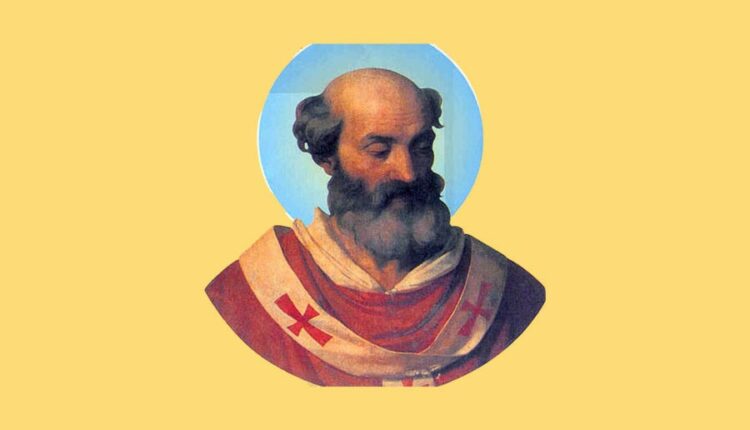 Originally from what is now Ciociaria, Silverius was the 58th Pope of the Church of Rome, deposed and then forced to abdicate in 537 by the followers of the Monophysite heresy in Constantinople.

He died in exile on Palmarola, a small island in the Pontine archipelago, of which he became the patron.

Is a controversy, starting with his birthplace, disputed – according to the sources – between Frosinone, of which he is currently the patron saint, and the neighbouring town of Ceccano where, however, there is no trace of a cult reserved for him.

Elected (and not designated) 58th Pope of the Church of Rome, his pontificate lasted barely a year due to the outbreak of the Greco-Gothic war between Constantinople and the Ostrogoths, which was destined to last for 18 long years.

The controversial election of Silverius

On 22 April 536 Pope Agapitus I died in Constantinople, effectively opening the game of his succession.

Amidst the discontent of many, Pope Silverius was elected, who at the time was only a sub-deacon, a religious office judged too low to have direct access to the papal throne.

Having been imposed by the Ostrogothic king Theodatus – who threatened to tame any revolt by force – the nobility and the rest of the clergy could only accept, putting on a good face.

One of Silverius’s greatest opponents, however, was Theodora, wife of the Eastern Emperor Justinian and follower of the Monophysites, who had already arranged for her ward, Vigilius, to succeed Agapitus.

Monophysitism is a theological doctrine developed by Archimandrite Eutiche in a monastery in Constantinople around 400 and in practice denies the divine nature of Christ, which he claims was ‘lost’ as a result of the Incarnation.

This theological doctrine, which affirmed the divine nature as the only nature of Jesus, was branded as heretical by the Council of Chalcedon in 451 but still managed to gather proselytes around the 5th and 6th centuries, causing the Coptic, Armenian and Jacobite Churches of Syria to break away from Rome.

Silvrius, The plot comes from the East

Meanwhile, from a political point of view, the situation became complicated in the Italic peninsula, at the time disputed between Constantinople and the invading Goths.

It was precisely the religious sphere and the Pontificate of Silverius that suffered.

The Emperor Justinian declared war on the Ostrogoths by sending his best general, Belisarius, who, advancing from the south, managed to reach Rome by making Vitiges, the new Ostrogoth king who had in the meantime succeeded Theodotus, take refuge in Ravenna.

In this context, Theodora continued to fight her personal battle against Silverius trying to soften his positions in favour of Monophysitism, but failing to do so she hatched a plot.

With a false letter she made it appear that the Pope had allowed the Goths to enter Rome to free it from the Byzantines. Unable to clear himself, Silverius was stripped of his pontifical robes, dressed as a monk and taken to Constantinople.

Not even the emperor Justinian could do anything more for him and sent him into exile to Patara in Lycia. In his place became Pope Vigilius, who was not hostile to Monophysitism.

Exile on the island of Palmarola of Silverius

When, however, the bishop of Patara brought the emperor irrefutable proof of Silverius’s innocence, Justinian was forced to release him and send him back to Rome.

Here, however, Vigilius, in order to defend himself, forces the general Belisarius to capture Silverius and deport him to the Pontine island of Palmarola.

It was here that Silverius, in an attempt to put an end to the schism between the Churches, decided to abdicate and after about a month, precisely on 2 December, the day on which he is remembered by the universal Church, he died.

His body, contrary to the custom for Popes, will remain in Palmarola, where he is venerated on 20 June, the day of his arrival on the island.