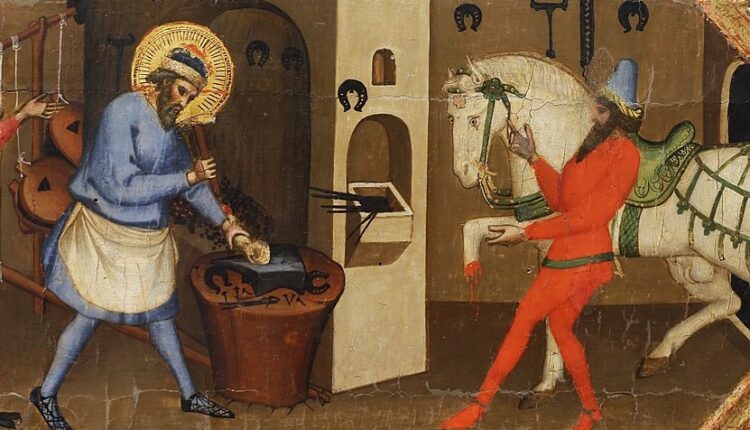 St. Eligius is the patron saint of goldsmiths and, by extension, of metalworkers, ironmongers, blacksmiths, horses and, therefore, of farmers, carters, mechanics and garagemen.

Born around 588, originally from Chaptelat in the Limousin, the ‘good Saint Eligius’ belonged to a family of wealthy peasants, who worked their land unlike many landowners who made slaves do it.

He left the care of the land to one of his brothers and entered as a goldsmith’s apprentice in a workshop where royal money was minted according to ancient Roman methods.

He saved some of his family’s income and used it for the charity of the poor and slaves.

He was as skilled in enamelling as he was in chiselling gold.

These professional qualities went hand in hand with scrupulous honesty.

When he was asked to make a gold throne for King Clotarius II (613-629), he made a second one with the extra gold he did not want to keep for himself.

In the service of the king

This gesture, extraordinary at the time, earned him the confidence of the king, who asked him to reside in Paris as royal goldsmith, royal treasury official and court advisor.

Appointed monetary officer in Marseilles, he redeemed many of the slaves sold at the port.

When Dagobert became king in 629, he was called back to Paris where he directed the Frankish kingdom’s coin minting workshops, which were located on the Quai des Orfèvres, near today’s Rue de la Monnaie.

Among others, he was commissioned to decorate the tombs of Saint Geneviève and Saint Denis.

He made reliquaries for Saint Germain, Saint Severin, Saint Martin and Saint Columba, and numerous liturgical objects for the new abbey of Saint Denis.

Thanks to his honesty, his frankness devoid of flattery, and his capacity for peaceful judgement, he won the trust of the king who often called on him, even going so far as to entrust him with a mission of peace with the Breton king Judicaël.

Great were the piety and prayer life of this layman who often participated in monastic offices.

In 632, he founded the monastery of Solignac south of Limoges.

While he was still alive, the monastery already had more than 150 monks who respected the two rules of Saint Benedict and Saint Columbanus; the monastery was placed under the protection of the king and not under the authority of the bishop.

The religious fervour and ardour put into the work made it one of the most prosperous monasteries of the time.

A year after the foundation of Solignac, he founded, in his house on the Ile de la Cité, the first women’s monastery in Paris, the direction of which he entrusted to Saint Aurea.

A year after the death of Dagobert, whom he had assisted in the last moments of his life, Eligius left the court, together with Saint Ouen (Audoen) who had held the position of councillor and chancellor.

Like him, he entered the seminary and was ordained a priest.

On the same day, 13 May 641, they received the episcopate: Saint Ouen (Audoen), bishop of Rouen and Eligius, bishop of Noyon and Tournai.

Eligius put all his zeal into the apostolic mission.

He died in 660, on the eve of his departure for Cahors.

The holy Queen Bathilde set out to greet him, but arrived too late.

A ‘church of Saint Eligius’ in Paris

In Paris, a church was dedicated to him in the blacksmiths’ and cabinetmakers’ quarter, the church of Saint Eligius, rebuilt in 1967.

A church destroyed in 1793 had been dedicated to him in the Rue des Orfèvres near the ‘Hôtel de la Monnaie’ (the mint).

In the Notre-Dame Cathedral, in the chapel of Saint Anne, once the seat of their confraternity, the goldsmiths and jewellers of Paris placed his statue and restored his altar.