Assisi, Pope Francis enlightens the young people of the new economy: “The earth is burning today, and it is today that we must act”

Pope Francis arrived in Assisi, the final and highest moment of the third edition of “Economy of Francis”, welcomed by the thousand young economists, researchers and changemakers who crowded the municipal theatre

One of the most obnoxious and impoverishing expressions that has always accompanied pontiffs is to ‘label’ them politically.

The Holy Father immediately eschews this schematism, but his criticism of capitalism is not indirect or veiled: he names it, rejects it as incompatible with Gospel values.

“The earth is burning today, and it is today that we must act,” he will say in his speech. 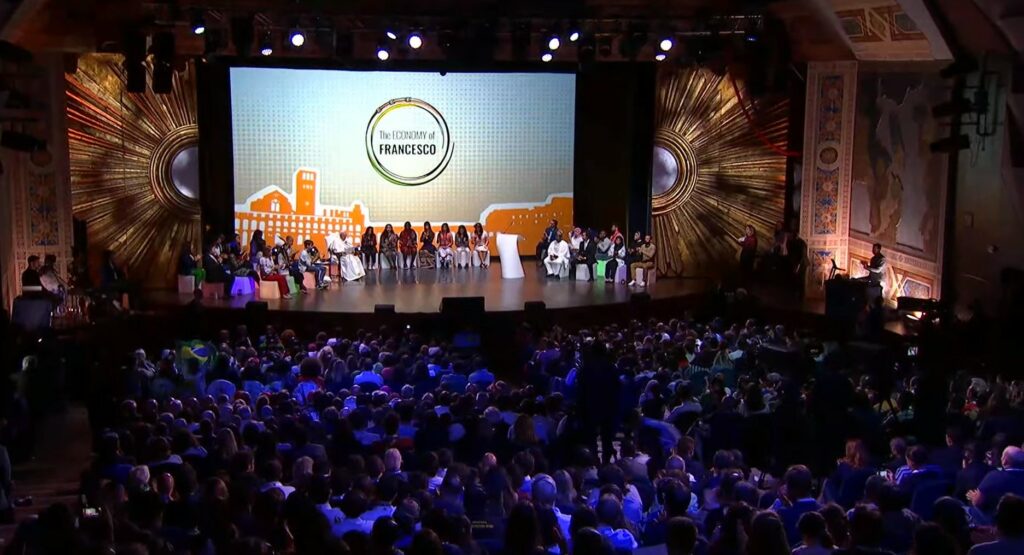 The economy exists has created an unsustainability that is not only environmental, but also spiritual.

How to recover? By learning from nature itself. By observing it with respect.

“Plants know how to cooperate with their surroundings,” the Holy Father observes, “Let us start again from the meekness of plants, from their mildness”.

But it is not enough to observe in order to apply what exists, we must turn over a new leaf: “If we speak of ecological transition but remain in the economic paradigm of the 1900s,” the Pope affirms, “which despoiled nature, we will not find a real solution.

The future of our planet and who will pay the bill

The analysis of the historical evolution of the last hundred years is clear and also identifies ‘who’ pays the consequences today and will pay the bill in the future.

“We have grown at the expense of the earth, plundering it. And this is not for the wellbeing of all, but of a small group,’ says Pope Francis.

The reflection of this can be seen in the inequalities that affect the indigenous peoples but also each woman, who is denied the freedom to become pregnant because ‘as soon as her belly grows she is out of work’. And alongside the many people who suffer the damage of this economic system, there are also those who will suffer it in the future.

“It will be children and grandchildren who will pay the bill, and it will be too high and too unjust,” says Pope Francis,  which adds that there is also a moral unsustainability of our economic system.

“There is a spiritual unsustainability of our capitalism,” will say. 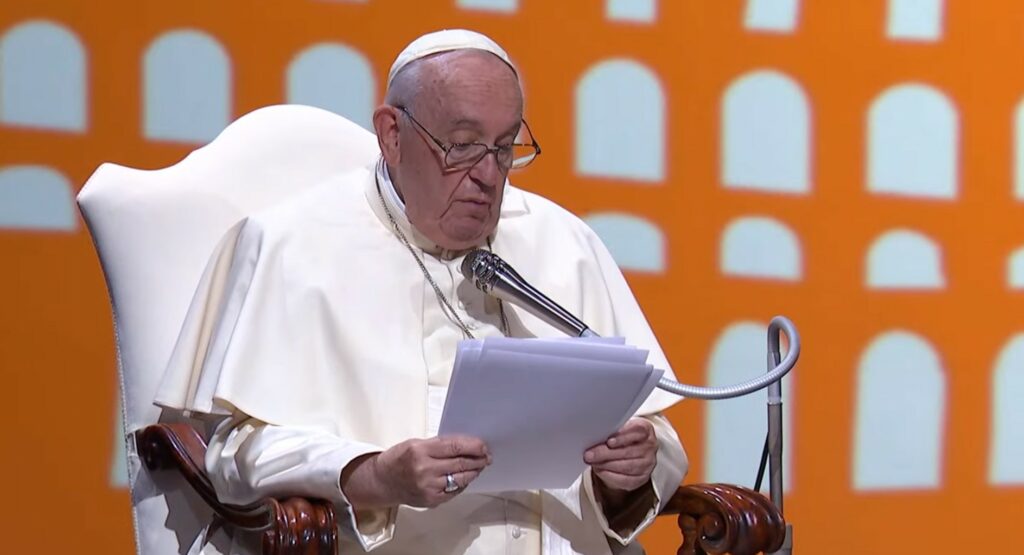 Pope Francis: we must have esteem for the poor

“Being in the city of Francis, I cannot dwell on poverty: doing economics means being inspired by and putting the poor at the centre. Our capitalism does not understand the evangelical paradigm ‘Blessed are the poor’, and does not esteem the poor’.

So it is with gentleness and but much frankness that the Holy Father shows the way to young people in response to the appeal he himself launched three years ago: to put the poor at the centre.

But not only that: to understand their hardship and problems, and to do this requires identification, and even better ‘incarnation’.

This is the spiritual legacy that Pope Francis leaves to the 1,000 young people who have come to Assisi.

“I leave you with three indications:

1) to look at the world through the eyes of the poorest: from the Franciscan movement first solidarity banks

2) You are above all scholars and researchers, but do not forget work, the workers who use their hands

3) Incarnation: translate ideal values into concrete works, to incarnate them. You will change the economic world if you use your hands in addition to your heart and head. Reality is always superior to the idea: be careful about this.

A Pope Francis who sees in these researchers, economists and changemakers the hope for change that is factual and not ideal, and for this he thanks them.

Pope Francis concludes with a prayer: ‘Father, we ask your forgiveness for not having respected the earth…’, is the opening phrase.

The young people greet him, all standing in jubilation, chanting his name.

A genuine enthusiasm addressed to one of the few spiritual references left on the planet, even for non-believers.

“Thank you for these words, which are a map for the future,” they said from the stage.

After that, gifts, hugs, selfies, blessings. The air is thick with love, and it is very beautiful.

A little peace in our hearts, the hearts of us all, who for too long have been polluted by the violence of war.

A peace that, too, hopefully maps to the future.