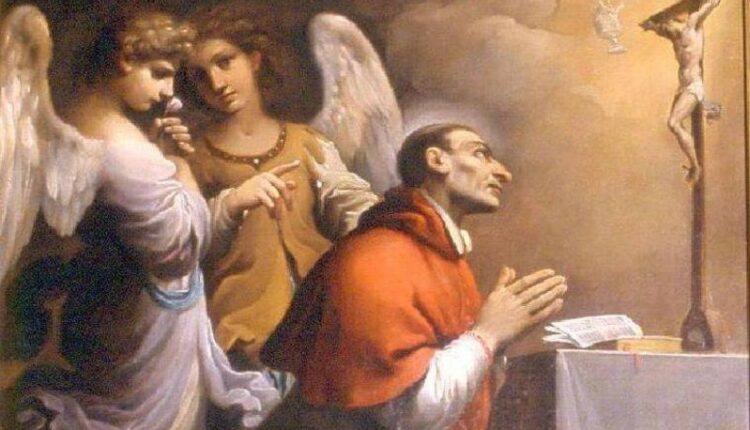 The Story of Charles Borromeo: If you are on the shores of Lake Maggiore, you will see it immediately: it is the statue of St Charles Borromeo overlooking the waters from Arona.

35 metres high, including the base, built in the 17th century in copper and iron, the sculpture represents the Archbishop of Milan in the act of blessing.

But above all, the monument has a special feature: it can be visited inside, thanks to a long staircase.

Whoever climbs the many steps, therefore, can look at the world below through two slits placed right over Borromeo’s eyes. And here is the teaching that this Saint left behind: to look at the world through his eyes, that is, through charity and humility.

Saint Charles Borromeo from “boy bishop” to “giant of holiness”

Born on 2 October 1538 in Arona into the noble Borromeo family, the second son of Gilberto and Margherita, he received the title of ‘commendatory’ of a local Benedictine abbey when he was only 12 years old.

The honorary title earned him a considerable income, but the future saint decided to allocate his possessions to the charity of the poor.

The Council of Trent

He studied canon law and civil law in Pavia and in 1559, at the age of 21, he became a doctor in utroque jure.

Many advised him to leave the ecclesiastical office to become head of the family.

Instead, Charles decided to continue on the priestly path: in 1563, at the age of 25, he was ordained a priest and immediately afterwards consecrated bishop.

In this capacity, he took part in the final stages of the Council of Trent (1562-1563), becoming one of the main promoters of the so-called ‘Counter-Reformation’ and collaborating on the drafting of the ‘Tridentine Catechism’.

Archbishop of Milan at only 27 years of age

And immediately putting into practice the indications of the Council, which required pastors to reside in their respective dioceses, in 1565, at only 27 years of age, Charles took possession of the Archdiocese of Milan, of which he was appointed archbishop.

His dedication to the Ambrosian Church was total: he made a pastoral visit to the entire territory three times, organising it into districts.

He founded seminaries to help train priests, had churches, schools, colleges and hospitals built, established the Congregation of Oblates, secular priests, and donated family wealth to the poor.

“Souls are won on one’s knees”.

At the same time, Charles dedicated himself to profoundly reforming the Church from within: at a particularly delicate time for Christianity, the ‘boy bishop’ was not afraid to defend the Church against the interference of the powerful and did not lack the courage to renew the ecclesial structures, sanctioning and correcting their shortcomings.

Aware of the fact that the reform of the Church, to be credible, must begin with the Pastors themselves, Borromeo encourages priests, religious and deacons to believe more in the power of prayer and penance, transforming their lives into a true path of holiness.

“Souls,” he often repeats, “are won on their knees”.

Charles, “Pastors be servants of God and fathers for the people”.

Pastoral action so truly stimulated by the love of Christ does not spare him hostility and resistance.

Against him, the so-called ‘Humiliati’ – a religious order at risk of doctrinal drift – organise an attack, firing an arquebus at him from behind, while the future saint is gathered in prayer.

The attack fails and Charles continues his mission, because “he wanted pastors who were servants of God and fathers for the people, especially the poor” (Pope Francis, Audience to the Community of the Pontifical Lombard Seminary in Rome, 25.01.2016).

The plague in Milan

The 1570s arrived and, above all, the plague spread: Milan was on its knees, bent by the epidemic and famine, and could only count on its archbishop.

And he does not spare himself: faithful to his episcopal motto, ‘Humilitas’, between 1576 and 1577 he visits, comforts and spends all his goods to help the sick.

His presence among the people is so constant that the historical period will be remembered as the ‘plague of San Carlo’ and centuries later even Alessandro Manzoni will mention it in his novel ‘I Promessi Sposi’ (The Betrothed).

Saint Charles on pilgrimage to the Shroud

The Archbishop of Milan also played a fundamental role in the arrival of the Shroud in Italy: it was in response to his intense desire to pray before the Holy Linen that the Dukes of Savoy, in 1578, decided to move Christ’s shroud from the Castle of Chambéry, in France, to Turin, where it would then remain forever.

The Borromeo made a pilgrimage there on foot, walking for four days, fasting and praying.

The ‘Scurolo’ in Milan Cathedral

But his physique, tried by so much fatigue, began to give out and in November 1584 he gave up: Charles died at only 46 years of age, but left an immense moral and spiritual legacy.

Since then, his remains have rested in the crypt of Milan Cathedral, in the so-called ‘Scurolo’, covered with silver-foil panels retracing his life.