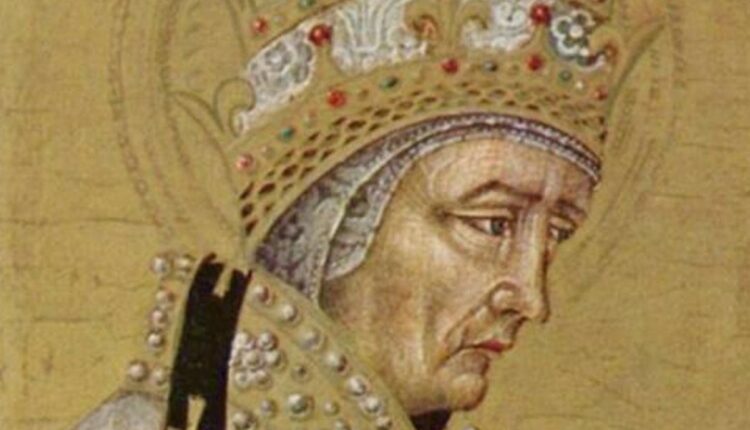 Saint Of The Day For January 20: Saint Fabian, Pope and Martyr

Fabian was Pope for 14 years. He maintained relations with Eastern Christians, and divided Rome into seven diaconates for the assistance of the poor.

Pope Fabian was imprisoned during the Decian persecution and died in 250.

He is buried in the catacombs of St Callixtus, and is honoured as a martyr.

Of Roman origin, he succeeded Pope Anterus in 236.

Having come from the countryside with some friends,’ writes Eusebius of Caesarea in his Ecclesiastical History, ‘he unwittingly found himself in the middle of the assembly that was to elect a successor to Antero.

Suddenly a dove descended from the sky and landed on Fabian’s head: on seeing that ‘sign’, the people acclaimed him as Pope.

He remained in office for fourteen years and, taking advantage of the climate of peace that reigned at the time, reorganised the city of Rome into seven ecclesiastical regions, entrusting each one to a deacon.

He also had to convene a synod to discuss the orthodoxy of Origen.

Besides caring for the community in Rome, Fabian also took care of other churches, ordaining bishops and sending missionaries to Gaul.

He also found himself having to deal with the issue of the ‘lapsi’, i.e. the fallen.

These were the Christians who, during the persecutions, had accepted to sacrifice to idols in order not to lose their goods and their lives, so much so that even Cyprian, bishop of Carthage, wrote that after the persecutions the Christians were all “intent on hoarding goods and, forgetting what the Christians had done at the time of the apostles, were burning with an insatiable desire for wealth and thought only of amassing it”.

Well, shortly before Fabian’s death – or immediately after, it is certain that the letter reflects Fabian’s style and his profound pastoral charity – the Church of Rome wrote to Cyprian: ‘The church stands strong in the faith.

It is true that some, either because they were impressed by the resonance they might have aroused because of their high social position, or because of human frailty, have given in; nevertheless, even though they are now separated from us, we have not abandoned them to their defection, but we have helped them and are still close to them so that they may be rehabilitated through penance and receive forgiveness from the one who can grant it.

For if we leave them at the mercy of themselves, their fall would become irreparable.

Try to do likewise, dear brothers, by extending your hand to those who have fallen so that they may rise again. Thus, if they should still suffer arrest, they will feel strong in confessing their faith this time and make up for their previous error’.

The persecution of Decius and the martyrdom of Fabian

The pastoral action of Pope Fabian must have been particularly wide-ranging and incisive if at some point the Emperor Decius began to consider the Pope his antagonist, so much so that Pope Fabian was one of the first victims of the persecution, on 20 January 250, and was buried in the crypt of the popes in the Callistus cemetery.

A few days after his death, St Cyprian wrote a letter to the people and clergy of Rome: ‘You give us all the details of his glorious end.

I rejoice that an administration so intact, has been so nobly crowned.

I congratulate you on the testimonies with which you honour his memory, his glory falls upon you, at the same time that it encourages us in faith and virtue’.

And to all the churches of Africa he wrote: ‘As harmful as the fall of one who is at the head is, so useful and salutary is a bishop who offers himself to his brethren as an example of steadfastness in the faith’.

St Fabian is often depicted in pontifical robes and sometimes with a dove, a ‘sign’ by which the people recognised in him the worthy successor of Pope Antero.

Saint Of The Day For January 6: Saint André Bessette

Saint Of The Day For January 5: Saint John Neumann

Saint Of The Day For January 4: Saint Angela Of Foligno

Funeral Of Joseph Ratzinger: A Look At The Life And Pontificate Of Benedict XVI

Saint Of The Day For January 19: Sts. Marius, Martha, Audiface And Abachum

Saint Of The Day For January 21: Saint Agnes, Virgin and Martyr