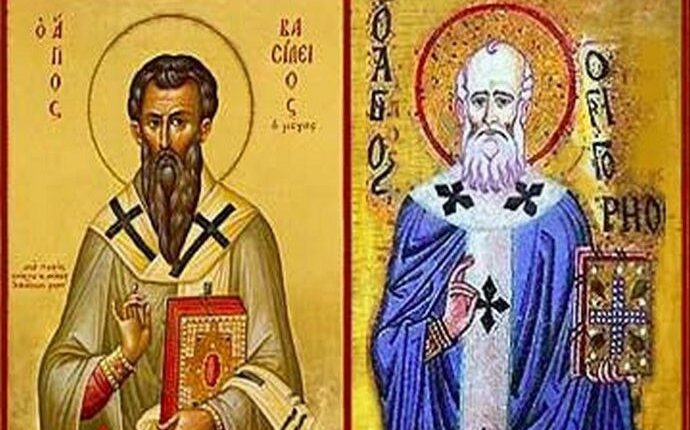 Saint Of The Day For January 2: Saint Basilius Magnus and Gregory Nazianzen

Two saints who in life were linked by deep friendship and whose liturgical memory falls on the same day: St Basilius and St Gregory Nazianzen are celebrated on 2 January.

Basilius and Gregory, A Family of Saints

St Basilius, born in Caesarea in 329, belonged to a family of saints: his sister Macrina and his brothers Peter, Bishop of Sebaste, and Gregory of Nyssa were also raised to the honours of the altars.

The young Basilius received the first rudiments of Christian doctrine from his father and continued his studies first in Constantinople and then in Athens.

At the same time he undertook studies in rhetoric, embarking on a brilliant career that he soon decided to abandon in order to follow his true vocation, the aspiration to a life of silence, solitude and prayer.

He travelled extensively, first to Pontus, then to Egypt, Palestine and Syria, attracted by the life of monks and hermits.

When he returned to Pontus, he found a fellow student he had met in Athens, Gregory of Nazianzus, and with him he founded a small monastic community, based on rules that Basilius had worked out during the experiences he had gained during his travels.

Basilius and Gregory Against Arianism

Meanwhile in Caesarea a new doctrine was gaining ground, based on the preaching of Arius, already condemned as a heretic by the Council of Nicaea in 325.

Arianism, however, also thanks to the support of the Eastern Emperor Valens, began to spread rapidly in Syria and Palestine.

Basilius left the peace and security of his hermitage, reached Caesarea, was ordained a presbyter and then a bishop, and began a relentless fight against the new heresy, so much so that he earned himself the title ‘Magnus’ during his lifetime.

His fight was not only on a doctrinal level, but also on a charitable one; to the Arians who claimed that they were not wronging anyone by defending what was their own, he retorted:

‘What really belongs to you? From whom did you receive what you say is yours? If everyone were content with the necessary, and gave the superfluous to his neighbour, there would be no more poor.”

He also founded, right on the outskirts of the city, a citadel of charity called Basiliade, which included orphanages, hospitals and shelters. In the meantime, Emperor Theodosius, who succeeded Valens, also supported the work of Basil, who managed to see the heresy defeated before his death in 389, at the age of almost sixty.

Gregory of Nazianzus also had a sister, Gorgonia, and a brother, Caesarius, who were saints.

He was the son of a presbyter and in Athens, where he studied, he met Basilius, to whom he was bound by a deep friendship and with whom he shared a hermitage in Cappadocia.

He too, however, had to leave that peace to assist his now elderly parents.

His father, in particular, wanted him at his side in the presbyterate in Nazianzus, but Gregory, who had allowed himself to be convinced, regretted his choice and sought refuge with Basilius once again.

Basilius, however, convinced him to return to his father to advise him in the difficult governance of the church of Nazianzus.

Later, Gregory was sent by Emperor Theodosius to Constantinople, with the task of fighting the spread of the Arian heresy.

Greeted on his arrival by a mob, Gregory stayed outside the walls of Constantinople in a small church that he dedicated to the Resurrection.

Thanks to his eloquence and the soundness of his doctrine, but above all thanks to his exemplary life, Gregory brought the city back to orthodoxy.

Despite this, opposed by a faction that was against him, he did not become bishop of Constantinople, and leaving the city to which he had devoted his life with innumerable efforts, he delivered a long, moving farewell speech.

Returning to Nazianzus, he devoted himself above all to writing and left a copious collection of verses of a spiritual nature: ‘Everything is toil for mortals,’ he wrote, ‘everything is mockery, shadow, appearance.

And that everything is unstable, O Word who created us, is due to Thy wisdom, so that we may learn to turn our love to what is stable and firm’.

Saint Of The Day For December 28: Holy Innocents, Martyrs

Saint Of The Day For December 27: Saint John, Apostle And Evangelist

Saint Of The Day For December 26: Saint Stephen, First Martier

Saint Of The Day For January 1: Most Holy Mary, Mother Of God

Saint Of The Day For January 3: Saint Antero, Pope