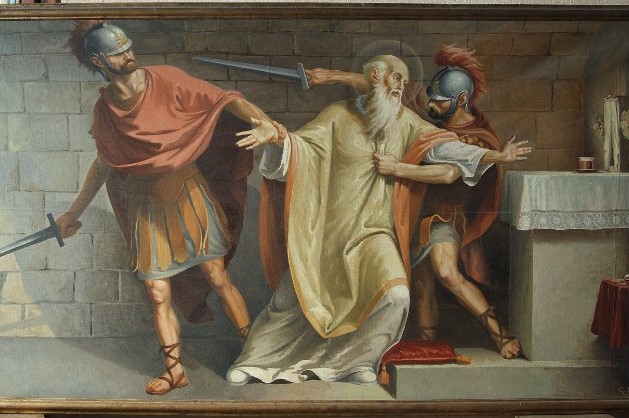 Saint Of The Day For January 16: Saint Marcellus I, Pope and Martyr

He is venerated as a saint by the Catholic Church and the Orthodox Churches.

The Life Of Marcellus I

According to the ‘Liberian Catalogue’, Marcellus, a Roman, was elected pope by the Roman clergy around the middle of 308.

Marcellinus would have been chosen as Marcellinus’ successor as early as the end of 306, but could only be consecrated and take possession of the throne on 27 May 308.

At his official ascension, he found the church in a disastrous situation.

Meeting places and some cemeteries had been confiscated and ordinary activities had been interrupted.

In addition to this, internal dissensions had arisen due to the large number of people who had abjured the faith during the persecution and who, under the leadership of an apostate, claimed to be readmitted to communion without doing penance, because, in their view, the long vacancy of the apostolic see after the abdication of Pope Marcellinus himself meant that these procedures were now obsolete and outdated.

Once elected, Marcellinus immediately set about reorganising the Church.

According to the Liber Pontificalis, he subdivided the metropolitan territory into 25 districts (tituli) similar to today’s parishes, at the head of which was placed a presbyter who supervised the preparation of catechumens, baptism, the administration of penances, liturgical celebrations and the care of burial and memorial places.

His name, however, is especially linked to the foundation of the Novella cemetery (Cœmeterium Novellœ), on the Via Salaria, opposite the cemetery of Priscilla.

At the beginning of the 7th century, there were probably 25 titular churches in Rome, and there is a historical tradition that reports how the ecclesiastical administration was reformed after Diocletian’s persecution, so the compiler of the Liber Pontificalis attributed it to Marcellus.

The pope’s work was, however, soon interrupted by the Lapsi controversy.

Marcellus, a strong supporter of the ancient traditions, hardened his position and demanded penance from those who wanted to be readmitted.

As evidence of this position, there is the epigraph composed by Pope Damasus I for his tomb: “True pastor, because he manifested to the lapsi the obligation they had to expiate their crime with the tears of penance, he was considered by those wretches as a terrible enemy.

Hence the fury, the hatred, the discord, the sedition, the death.

Because of the crime of one who even during peace denied Christ, Marcellus was deported, a victim of a tyrant’s cruelty’.

Because of this, a party was formed that opposed the pope, and quarrels, seditions and massacres broke out. Maxentius, who gave credence to the accusations of the turbulents, held Marcellus responsible for the riots and exiled him to a place that is still unknown.

All this took place at the end of 308 or the beginning of 309, according to the ‘Liberian Catalogue’, which speaks of a pontificate no longer than 1 year, 6 (or 7) months and 20 days.

Marcellus died in exile shortly after leaving Rome and was immediately venerated as a saint.

According to the Depositio episcoporum, the ‘Chronography’ of 354 and other documents, his feast day falls on 16 January.

Despite this, both the place of his exile and the exact date of his death, assumed to be around 16 January, are unknown.

It is certain, however, according to the Hieronymic Martyrology, that he was transferred to Rome and buried in the cemetery of Priscilla.

His remains are laid in the ancient green basalt urn by the high altar of the Church of San Marcello al Corso.

Marcellus and the Passio Marcelli

In the Liber Pontificalis and the Roman Breviary a different version of the death of Marcellus is reported, a version handed down from a 5th-century Passio Marcelli contained in the Acta Sanctorum: Maxentius, infuriated by the reorganisation of the Church undertaken by Marcellus, demanded from the pope that he renounce his episcopal dignity and sacrifice to pagan gods, just like his predecessor.

Upon his refusal, he was condemned to work as a slave at a postal station (catabulum) in Rome.

After nine months he was freed by the Roman clergy, but was again condemned for consecrating the house of the matron Lucina near the Via Lata.

The condemnation consisted of looking after the horses stabled at the same catabulum.

This version was perhaps created to somehow locate the place of the pope’s martyrdom: the Title of Marcellus, which was located near the public post office, hence the name ‘San Marcello in catàbulo’.

For this reason, he is considered the patron saint of stablemen and horse breeders.

The present Church of San Marcello al Corso dates back to the beginning of the 16th century, and was probably built on the remains of the previous church, which in turn may have stood on the site of the catabulum where Marcellus died.

According to the famous German scholar Theodor Mommsen, Marcellinus would not have been the bishop of Rome, but a simple Roman presbyter who had been entrusted with the regency of ecclesiastical administration during the last period of the vacancy of the throne of Peter.

According to this theory, 16th January 309 would be nothing other than the date of death of Marcellinus (no longer pope since his abdication on 25th October 304), who would be succeeded by Pope Eusebius.

This hypothesis would be corroborated by the fact that in some catalogues only one pope is mentioned, sometimes called Marcellinus and sometimes Marcellinus, as if to disown Marcellinus or to confuse the two names into one.

However, there is no historical evidence to support this thesis.

Saint Of The Day For January 6: Saint André Bessette

Saint Of The Day For January 5: Saint John Neumann

Saint Of The Day For January 4: Saint Angela Of Foligno

Funeral Of Joseph Ratzinger: A Look At The Life And Pontificate Of Benedict XVI

Saint Of The Day For January 14: Saint Felix Of Nola, Priest