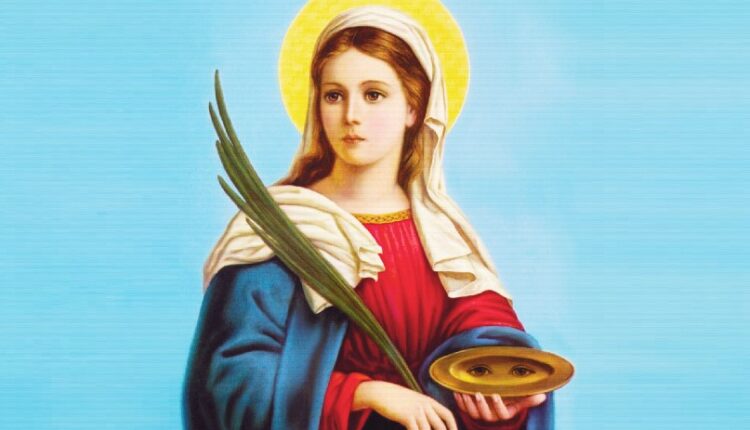 Lucy suffered martyrdom on 13 December 304. Denounced as a Christian, the prefect is said to have taken a fancy to her eyes and she, in order to crush his passion, tore them out by sending them to him on a silver platter.

Hence the invocation of Lucy as Protectress of the eyes.

The Story of Saint Lucy

Lucy was born at the end of the 3rd century in Syracuse, to a wealthy family of high rank.

Educated in a Christian manner, she was still a child when she was orphaned by her father.

Raising her with love and dedication is her mother Eutychia.

While still a child, Lucy contemplates consecrating herself to God, but guards her desire in her heart.

Unaware of her daughter’s intentions, Eutychia, as was the custom at the time, betroths her to a young man of good family but not Christian.

Lucy does not reveal that she wants to offer her virginity to Christ and under various pretexts postpones the wedding, trusting in prayer and divine help.

Lucy, The journey to Catania and the intercession of Saint Agatha

It was in the year 301 when Lucy and her mother made a pilgrimage to Catania, to the tomb of Saint Agatha.

Eutychia was suffering from haemorrhages and, despite several costly cures, nothing had helped her.

Mother and daughter wanted to ask the young martyr from Catania for the grace of healing.

It is 5 February when they arrive at the foot of Mount Etna, it is Agatha’s dies natalis.

on hearing the Gospel episode of the woman suffering from haemorrhaging, who had been healed by the simple touch of the edge of the Lord’s garment, Lucy, turning to her mother, said to her:

“Mother, if you believe the things that have been read, you will also believe that Agatha, who suffered for Christ, has free and confident access to His court. Touch therefore confidently the sepulchre of Her, if thou wilt, and thou shalt be healed'”.

Lucia prays for her mother and begs for herself to be able to dedicate her life to God.

Absorbed and taken from a sweet sleep, as if rapt in ecstasy, she sees Agatha among the angels announcing to her:

‘Lucia, my sister and Virgin of the Lord, why do you ask of me what you yourself can grant? Your faith has been of great benefit to your mother; she is already healed.

And as for me the city of Catania is filled with graces, so for you the city of Syracuse will be preserved, for Our Lord Jesus Christ has pleased that you have kept your virginity undefiled’.

Having awakened, Lucy tells her mother what has happened to her, reveals to her that she wants to renounce an earthly spouse and asks to be allowed to sell her dowry to give charity to the poor.

Disappointed and annoyed, the young man who coveted her hand denounces her to the prefect Paschasius, accusing her of worshipping Christ and disobeying the rules of Diocletian’s edict.

Arrested and taken to the prefect, Lucy, when questioned, refuses to sacrifice to the gods and proudly professes her faith:

“I am a servant of the Eternal God and He has said:

‘When you are brought before kings and princes, do not give yourselves any thought as to how or what you should say, for it is not you who speak but the Holy Spirit is speaking in you'”.

Paschasius asked: “Oh, so you believe you have the Holy Spirit?”

And Lucy: “The Apostle said:

‘The chaste are the temple of God and the Holy Spirit dwells in them'”.

Paschasius, in order to discredit her, then commands her to be led to the brothel.

Lucy declares that she would not give in to the concupiscence of the flesh and that whatever violence her body might have undergone against her will, she would remain chaste, pure and uncontaminated in spirit and mind.

Prodigiously immovable, the soldiers could not push her; bound hand and foot, not even oxen could drag her.

Exasperated by the extraordinary event, Paschasius orders the girl to be burnt.

But the fire does not harm her.

Enraged Pascasius decides to have her put to death by the sword.

Saint Of The Day For December 11: Saint Damasus I

Saint Of The Day For December 10: Saint Gregory III

Women and the art of speech: Economy of Francesco’s solidarity with the women of Iran