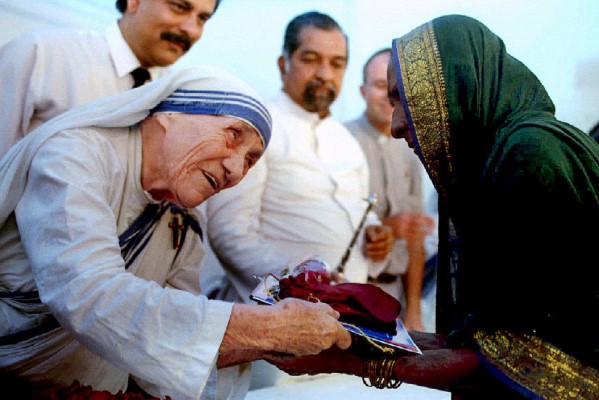 5 September, Saint of the Day: St. Teresa of Calcutta / VIDEO

The remarkable woman who would be known as Mother Teresa began life named Agnes Gonxha Bojaxhiu. Born on August 26, 1910 in Skopje, she was the youngest child born to Nikola and Drane Bojaxhiu

Gonxha’s religious formation was assisted by the vibrant Jesuit parish of the Sacred Heart in which she was very involved as a youth.

Subsequently moved to pursue missionary work, Gonxha left her home in September 1928 at the age of 18 to join the Institute of the Blessed Virgin Mary, known as the Sisters of Loreto, in Ireland.

She received the name Sister Mary Teresa after St. Therese of Lisieux

In December of 1929, she departed for her first trip to India, arriving in Calcutta.

After making her First Profession of Vows in May 1931, Sister Teresa was assigned to the Loreto Entally community in Calcutta and taught at St. Mary’s School for girls.

Sister Teresa made her Final Profession of Vows, On May 24, 1937, becoming, as she said, the “spouse of Jesus” for “all eternity.”

From that time on she was called Mother Teresa

She continued teaching at St. Mary’s and in 1944 became the school’s principal.

Noted for her charity, unselfishness and courage, her capacity for hard work and a natural talent for organization, she lived out her consecration to Jesus, in the midst of her companions, with fidelity and joy.

It was on September 10, 1946 during a train ride from Calcutta to Darjeeling for her annual retreat, that Mother Teresa received her “inspiration, her call within a call.”

On that day, in a way she would never explain, Jesus’ thirst for love and for souls took hold of her heart and the desire to satiate His thirst became the driving force of her life.

By means of interior locutions and visions, Jesus revealed to her the desire of His heart for “victims of love” who would “radiate His love on souls.”

Jesus asked Mother Teresa to establish a religious community, Missionaries of Charity, dedicated to the service of the poorest of the poor

After a short course with the Medical Mission Sisters in Patna, Mother Teresa returned to Calcutta and found temporary lodging with the Little Sisters of the Poor.

On December 21, she went for the first time to the slums.

She visited families, washed the sores of some children, cared for an old man lying sick on the road and nursed a woman dying of hunger and tuberculosis.

She started each day with communion then went out, rosary in her hand, to find and serve Him amongst “the unwanted, the unloved, the uncared for.”

After some months, she was joined, one by one, by her former students.

On October 7, 1950 the new congregation of the Missionaries of Charity was officially established in the Archdiocese of Calcutta.

This spirit later inspired the Lay Missionaries of Charity.

In answer to the requests of many priests, in 1981 Mother Teresa also began the Corpus Christi Movement for Priests as a “little way of holiness” for those who desire to share in her charisma and spirit.

Numerous awards, beginning with the Indian Padmashri Award in 1962 and notably the Nobel Peace Prize in 1979, honored her work, while an increasingly interested media began to follow her activities.

She received both prizes and attention ‘for the glory of God and in the name of the poor.”

In spite of increasingly severe health problems towards the end of her life, Mother Teresa continued to govern her Society and respond to the needs of the poor and the Church.

By 1997, Mother Teresa’s Sisters numbered nearly 4,000 members and were established in 610 foundations in 123 countries of the world.

After meeting Pope John Paul II for the last time, she returned to Calcutta and spent her final weeks receiving visitors and instructing her Sisters.

On September 5, Mother Teresa’s earthly life came to an end

Her response to Jesus’ plea, “Come be My light,” made her a Missionary of Charity, a “mother to the poor,” a symbol of compassion to the world, and a living witness to the thirsting love of God.

As a testament to her most remarkable life, Pope John Paul II permitted the opening of her Cause of Canonization.

On December 20, 2002 he approved the decrees of her heroic virtues and miracles.

4 September, Saint of the Day: Saint Boniface I, Pope

Saint of the Day, 6 September: Saint Zacharius, prophet is celebrated