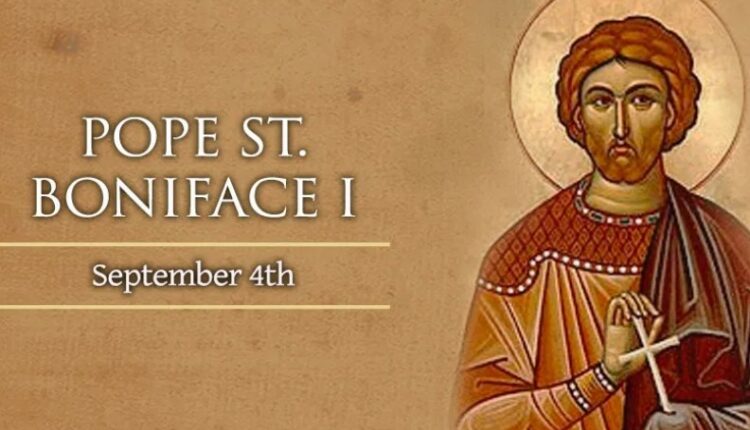 4 September, Saint of the Day: Saint Boniface I, Pope

Saint Boniface I: Elected 28 December, 418; d. at Rome, 4 September, 422. Little is known of his life antecedent to his election. The “Liber Pontificalis” calls him a Roman, and the son of the presbyter Jocundus. He is believed to have been ordained by Pope Damasus I (366-384) and to have served as representative of Innocent I at Constantinople (c. 405)

Boniface I, schisms and contrasts in the conclave

At he death of Pope Zosimus, the Roman Church entered into the fifth of the schisms, resulting from double papal elections, which so disturbed her peace during the early centuries.

Just after Zosimus’s obsequies, 27 December, 418, a faction of the Roman clergy consisting principally of deacons seized the Lateran basilica and elected as pope the Archdeacon Eulalius.

The higher clergy tried to enter, but were violently repulsed by a mob of adherents of the Eulalian party.

On the following day they met in the church of Theodora and elected as pope, much against his will, the aged Boniface, a priest highly esteemed for his charity, learning, and good character.

On Sunday, 29 December, both were consecrated, Boniface in the Basilica of St. Marcellus, supported by nine provincial bishops and some seventy priests

Eulalius in the Lateran basilica in the presence of the deacons, a few priests and the Bishop of Ostia, who was summoned from his sickbed to assist at the ordination.

Each claimant proceeded to act as pope, and Rome was thrown into tumultuous confusion by the clash of the rival factions.

The Prefect of Rome, Symmachus, hostile to Boniface, reported the trouble to the Emperor Honorius at Ravenna, and secured the imperial confirmation of Eulalius’s election.

Boniface was expelled from the city.

His adherents, however, secured a hearing from the emperor who called a synod of Italian bishops at Ravenna to meet the rival popes and discuss the situation (February, March, 419).

Unable to reach a decision, the synod made a few practical provisions pending a general council of Italian, Gaulish, and African bishops to be convened in May to settle the difficulty.

It ordered both claimants to leave Rome until a decision was reached and forbade return under penalty of condemnation.

As Easter, 30 March, was approaching, Achilleus, Bishop of Spoleto, was deputed to conduct the paschal services in the vacant Roman See.

Boniface was sent, it seems, to the cemetery of St. Felicitas on the Via Salaria, and Eulalius to Antium

On 18 March, Eulalius boldly returned to Rome, gathered his partisans, stirred up strife anew, and spurning the prefect’s orders to leave the city, seized the Lateran basilica on Holy Saturday (29 March), determined to preside at the paschal ceremonies.

The imperial troops were required to dispossess him and make it possible for Achilleus to conduct the services.

The emperor was deeply indignant at these proceedings and refusing to consider again the claims of Eulalius, recognized Boniface as legitimate pope (3 April, 418).

The latter re-entered Rome 10 April and was acclaimed by the people. Eulalius was made bishop either of Nepi in Tuscany or of some Campanian see, according to the conflicting data of the sources of the “Liber Pontificalis”.

The schism had lasted fifteen weeks.

Early in 420, the pope’s critical illness encouraged the artisans of Eulalius to make another effort.

On his recovery Boniface requested the emperor (1 July, 420) to make some provision against possible renewal of the schism in the event of his death.

Honorius enacted a law providing that, in contested Papal elections, neither claimant should be recognized and a new election should be held.

Boniface’s reign was characterised by great zeal and activity in organisation and disciplinary control.

He reversed his predecessor’s policy of endowing certain western bishops with extraordinary powers of papal vicariate.

In general, Boniface I’s work of reorganising the Church was uninterrupted and necessary, in a historical era characterised by contrasts and schisms of a personalistic nature.

Saints of the day, 3 September: Saint Gregory the Great (Pope Gregory I)

5 September, Saint of the Day: St. Teresa of Calcutta / VIDEO