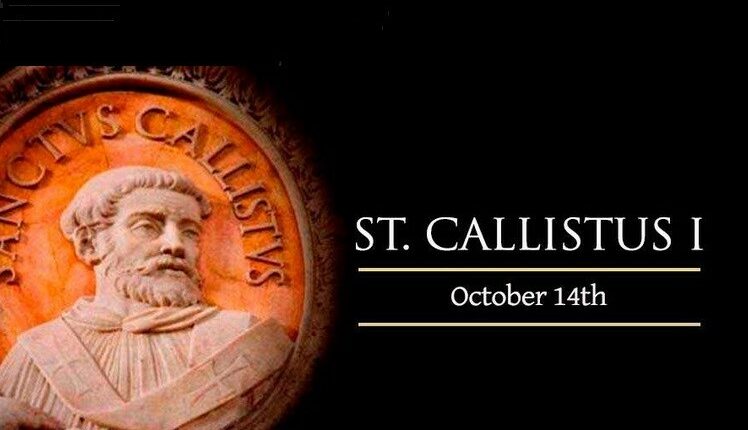 Saint of the Day for October 14: Saint Callistus I, Pope and Martyr

St. Callistus Story: slave, deacon, pope. He organized Rome’s first cemetery with the “Crypt of the Popes” attached, known today as the “Catacombs of St. Callistus”

But Callistus, a 3rd-century martyr, was not buried here, but in the Via Aurelia cemetery.

From the writings of the then anti-pope, the future St. Hippolytus, we have a lot of news about St. Callistus, though obviously in a negative light!

We gather that Callistus was born to a Christian family in the Trastevere district.

Made a slave of Carpophorus, a Christian master, he was instructed both in the faith and in the administrative management of his possessions, given his marked intelligence, leaving him empowered to earn some extra income.

He thus founded a kind of “bank” at the public pool, what would become the Baths of Caracalla.

It seems that the very use of money did not mark his fortune: in fact, he lost not only his own, but also squandered that of his master and those who had trusted his administration.

He thus attempted to escape aboard a ship: realizing that they had found him, he threw himself into the sea, but was caught and brought back by his master, who set him to turning a millstone.

Pressed by his debtors, Carpophorus freed Callisto, hoping that he would be able to return the money, but this did not work out as hoped.

He was thus condemned again, this time to the mines in Sardinia.

It was in this context that he would meet other prisoners enslaved for their faith.

The Emperor Commodus’ concubine, Marcia, wished to do a pious work before God, and drew up a list of slaves to be freed from the mines of Sardinia.

Callistus was not on this list, but the priest appointed by Marcia was persuaded by Callistus to be included on the list!

Back in Rome, the Pope asked Callistus to go to Anzio, as his presence was not welcome in the city.

Here he had the opportunity to show by deeds, rather than words, his new way of life, putting his skills at the service of the community.

Years later, Pope Zephyrinus wanted him in Rome as his secretary and consecrated him deacon, also entrusting him with the organization of the city’s cemeteries.

Callistus’s work did not go unnoticed both for his organizational skills and, above all, for his witness of faith, so much so that the Christian community, upon Zephyrinus’s death, elected him pope in 217.

This election did not please the more “rigid” fringe of the Community, so much so that they rallied around another priest, Hippolytus, thus opening a schism in the Church.

Callistus was considered heretical on various points of doctrine, especially having espoused the theses of Sabellius, when in fact it would be Callistus himself who condemned him for heresy, but Hippolytus could not be objective in his judgment!

In addition to being a heretic, he was considered too lax in the moral sphere, as he too superficially welcomed sinners, granted too much leniency to Christians who had proved weak in times of persecution, and too lightly allowed marriage between slaves and freemen.

Which even a great man like Tertullian criticized: “The pontifex maximus, the bishop of bishops, forgives adulterers and fornicators.

And where will this edict so liberal be afflicted? On the doors of the brothels, where prostitutes live? But no!

It will be displayed in the church, the virgin of Christ!”

And Hippolytus: “Callistus even allowed unmarried women, if they fell in love with a man of inferior status and if they wished to avoid marrying before the law so as not to lose their rank, to unite with the man of their choice, whether slave or free, and to keep him for a groom, without resorting to legal marriage.”

What moved Callistus’ choices was the gospel of mercy, preventing the community of Christians from becoming a sect of Puritans!

He was taken prisoner, thrown into a well and stoned to death on October 14, 222 near Trastevere.

Christians took the body and buried it on the Via Aurelia, unable to risk taking it to the Crypt of the Popes, which he had built in the Catacombs.

Apparently it was Gregory III (731-41) who moved Callistus’ body to the basilica of Santa Maria in Trastevere.

Hippolytus, too, was eventually reconciled with the Church and in 235 he, too, was martyred in Sardinia where he was deported along with Pope Pontian (remembered on August 13).

Saint Of The Day For October 13: St. Theophilus

Saint Of The Day For October 12: Our Lady Of Aparecida

Saint Of The Day For October 11: Saint John XXIII

Saint Of The Day For October 10: Saint Francis Borgia

Saint Of The Day For October 9: Saint Denis And Companions

Saint of the Day for October 13: St. Theophilus

Saint of the Day for October 15: Saint Teresa of Avila