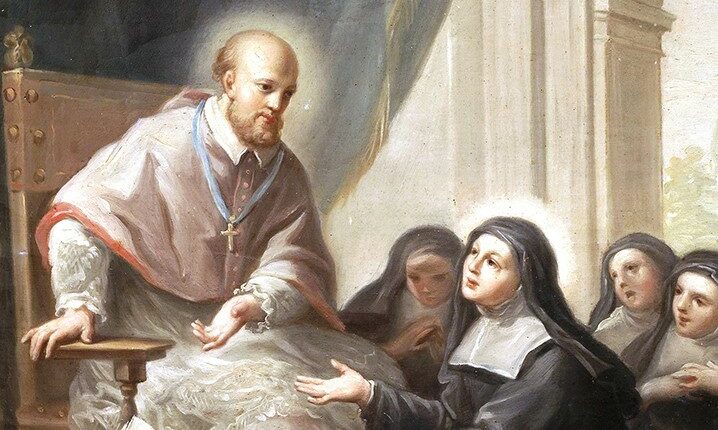 Saint Of The Day For January 24: Saint Francis de Sales

St. Francis de Sales was a man of dialogue and meekness, who never renounced the truth. He was one of the first modern evangelizers, using pamphlets posters.

He proposed a different model of Christian life for all states of life in the Church, to be realized in the difficulties of everyday life.

Born August 21, 1567 in Thorens-Glières, France, to an ancient noble family of Boisy, in Savoy, he trained in the best French schools, then followed the wishes of his father, who dreamed for him a legal career, and went to study law at the University of Padua.

There he discovered a definite interest in theology.

He graduated with honors, returned to France in 1592, and enrolled in the bar association.

His greatest desire, however, was to become a priest, so the following year, December 18, he was ordained, and three days later, at the age of 26, he celebrated his first Mass. Appointed archpriest of the cathedral chapter of Geneva, Francis manifests qualities of zeal and charity, diplomacy and level-headedness.

Amid the raging storm of Calvinist heresy, he volunteered to re-evangelize the Chablais region.

In preaching he sought dialogue, but struggled against doors closed in his face, snow, cold, hunger, nights in the open, ambushes, insults and threats.

He then studied Calvin’s doctrine to understand it thoroughly and better to explain the differences with the Catholic creed, and instead of resorting to preaching and theological dispute, he devised the system of publishing, posting in public places or leaving door-to-door sheets and posters, expounding the individual truths of faith in a simple and effective way.

Conversions were not many, but hostility and prejudice to Catholicism cease.

Francis then established himself in Thonon, in the capital of Chablais, and there dedicated himself, among other things, to visits to the sick, to charitable works and to personal talks with the faithful.

He then asked to be transferred to Geneva, a symbolic city of the Calvinist doctrine, with the desire to recover as many believers as possible to the Catholic Church,

In 1599 he was appointed coadjutor bishop of Geneva, three years later the diocese is totally in his hands, based in Annecy.

Francis spent himself without reserve: he visited parishes, trained the clergy, reorganised monasteries and convents; he never spared himself in preaching, catechesis and initiatives for the faithful.

He chose the conversational catechism, and his perseverance and sweetness in spiritual direction led to various conversions.

In March 1604, during the Lenten preaching in Dijon, he met Jane-Frances Frémiot de Chantal, with whom he established a beautiful friendship from which also arose a spiritual direction by epistolary correspondence.

In 1608, he dedicated to her the Introduction to the Devout Life, or Philothea,  the ideal name for those who love or want to love God.

Francis conceived the text to summarize in a concise and practical way the principles of the interior life and to teach his disciples to love God with all their heart and with all their strength in everyday life.

The idea was to lead those who live in the world to a fully Christian life, through performance of their civil and social responsibilities.

The work was a huge success.

The long and intense collaboration between Francis and Jane gave rise to great spiritual fruits, among which were the Congregation of the Visitation of Holy Mary, founded in 1610 in Annecy with the main purpose of visiting and helping the poor.

Francis himself dictated the Constitutions, inspired by the rule of St. Augustine. Jane, however, insisted that her Sisters also care for the instruction and education of girls, especially those born to wealthy families. In 1616, Francis wrote the Theotimus or Treatise on the Love of God, a work of extraordinary theological, philosophical and spiritual depth, conceived as a long letter addressed to a friend, Theotimus (the God-affeared or God-desiring), in which Francis presents to each man his essential vocation: to live is to love.

The purpose of the work was to show the best ways for each person to make a personal encounter with God.

Francis de Sales died on 28 December 1622 in Lyon, at the age of 52. On 24 January of the following year, his remains were translated to Annecy.

Saint Of The Day For January 17: Saint Antony, Abbott

Saint Of The Day For January 16: Saint Marcellus I, Pope And Martyr

Saint Of The Day For January 23: Saint Emerenziana, Roman Martyr