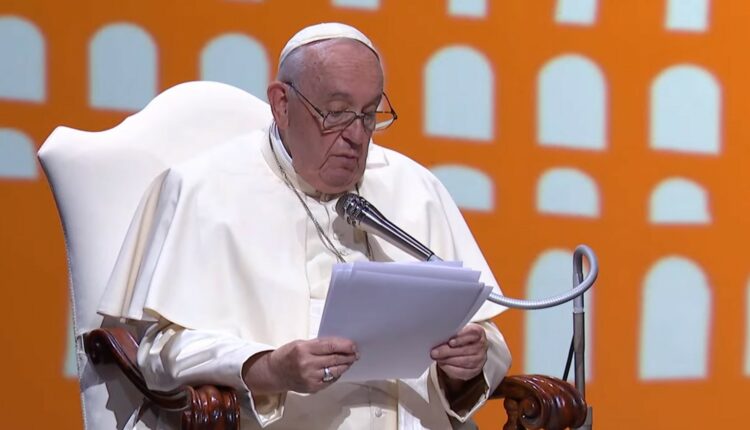 General Audience, Pope Francis: we all experience desolation, we must know how to interpret it

Pope Francis, in the catechesis of the General Audience, spoke about the negative experiences of life, and the desolation and sadness that result from them

Pope Francis: in moments of desolation listening to God strengthens us

All human beings, in the course of a lifetime, face some form of desolation and sadness resulting from a negative experience.

The latter can strengthen us if we know how to encode and interpret it in the divine message.

Discernment, said the Holy Father, is “based on actions, and actions have an affective connotation that must be recognised, because God speaks to the heart”.

Recalling the Spiritual Exercises of St Ignatius of Loyola, Pope Francis said that desolation can be defined as “darkness of the soul, turmoil in it, movement towards low and earthly things, the restlessness of various agitations and temptations, moving towards lack of trust, without hope, without love, when one finds oneself all sluggish, lukewarm, sad and as if separated from one’s Creator and Lord”.

What is important, when faced with a moment of desolation, is to know how to interpret it: the risk is to lose its experiential value, if we are in a hurry to get rid of the sense of emptiness that comes with it

From a negative experience comes remorse, which, from an etymological point of view, means “the conscience that bites (in Italian, mordere) that does not allow peace”.

Pope Francis also emphasised the importance of learning to “read” sadness, which is mostly viewed negatively, but instead “can be an indispensable wake-up call for life, inviting us to explore richer and more fruitful landscapes that transience and escapism do not allow”.

St. Thomas, in the Summa Theologica, defines sadness as “a pain of the soul”: like nerves for the body, it redirects our attention towards a possible danger or benefit not considered.

Therefore, sadness is “indispensable for our health; it protects us from harming ourselves and others” and “it would be much more serious and dangerous if we did not experience it,” the Pope said.

Moreover, for those who have the desire to do good, sadness is “an obstacle with which the tempter tries to discourage us” and, in such a case, one must act in a way that is exactly contrary to what is being suggested, determined to continue what one had set out to do.

The Pope therefore urged believers to rediscover the meaning of prayer, which is sometimes abandoned by those who experience moments of sadness.

“A wise rule says not to make changes when you are desolate. It will be the time that follows, rather than the mood of the moment, that will show the goodness or otherwise of our choices.”

Trials assailed him from all sides, but Jesus was determined to do the Father’s will and they could not hinder his path.

In the spiritual life, the Pope said, “trial is an important moment” because “when you come to serve the Lord, prepare yourself for trials” (Sir 2:1).

Similarly, a professor only accepts that a student has passed an exam after examining him to see if he knows the essentials of the subject.

“If we know how to pass through loneliness and desolation with openness and awareness, we can emerge strengthened humanly and spiritually. No trial is beyond our reach”.

Pope Francis concluded by echoing St Paul’s words that no one is tempted beyond his or her means, because the Lord never abandons us and with Him near we can overcome every temptation.

Saint Of The Day For October 26: Saint Folco Scotti

Saint Of The Day For October 26: Saint Folco Scotti

Saint Of The Day For October 27: Saint Frumentius, bishop, apostle of Ethiopia