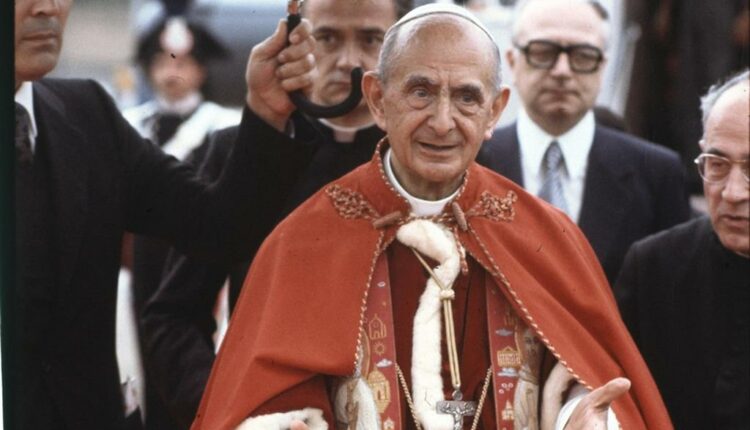 Saint Paul VI’s Story: born near Brescia in northern Italy, Giovanni Battista Montini was the second of three sons. His father, Giorgio, was a lawyer, editor, and eventually a member of the Italian Chamber of Deputies. His mother, Giuditta, was very involved in Catholic Action

After ordination in 1920, Giovanni did graduate studies in literature, philosophy, and canon law in Rome before he joined the Vatican Secretariat of State in 1924, where he worked for 30 years.

He was also chaplain to the Federation of Italian Catholic University Students, where he met and became a very good friend of Aldo Moro, who eventually became prime minister.

Moro was kidnapped by the Red Brigade in March 1978, and murdered two months later. A devastated Pope Paul VI presided at his funeral

In 1954, Fr. Montini was named archbishop of Milan, where he sought to win disaffected workers back to the Catholic Church.

He called himself the “archbishop of the workers” and visited factories regularly while overseeing the rebuilding of a local Church tremendously disrupted by World War II.

In 1958, Montini was the first of 23 cardinals named by Pope John XXIII, two months after the latter’s election as pope.

When he was elected pope in June 1963, he immediately decided to continue that Council, which had another three sessions before its conclusion on December 8, 1965.

The day before Vatican II concluded, Paul VI and Patriarch Athenagoras revoked the excommunications that their predecessors had made in 1054.

The pope worked very hard to ensure that bishops would approve the Council’s 16 documents by overwhelming majorities.

Paul VI had stunned the world by visiting the Holy Land in January 1964, and meeting Athenagoras, the Ecumenical Patriarch of Constantinople in person

The pope made eight more international trips, including one in 1965, to visit New York City and speak on behalf of peace before the United Nations General Assembly.

He also visited India, Columbia, Uganda, and seven Asian countries during a 10-day tour in 1970.

Also in 1965, he instituted the World Synod of Bishops, and the next year decreed that bishops must offer their resignations on reaching age 75.

In 1970, he decided that cardinals over 80 would no longer vote in papal conclaves or head the Holy See’s major offices.

He had increased the number of cardinals significantly, giving many countries their first cardinal. Eventually establishing diplomatic relations between the Holy See and 40 countries, he also instituted a permanent observer mission at the United Nations in 1964.

Pope Paul VI died at Castel Gandolfo on August 6, 1978, and was buried in St. Peter’s Basilica.